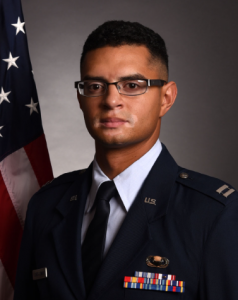 Capt Flores-Lombay is a native of Willimantic, Connecticut. He earned his commission through AFROTC upon graduation from Central Connecticut State University and entered the United States Air Force in 2013 as an Intelligence Officer. He started his career as the Chief of Operations at Joint Base McGuire-Dix-Lakehurst, NJ. There he supported C-17 and KC-10 operations during OPERATION INHERENT RESOLVE and OPERATION RESOLUTE SUPPORT. Prior to his current position, he was assigned as the Chief of Intelligence for the 90th Missile Wing supporting 150 Minuteman III nuclear intercontinental ballistic missiles.