September 11, 2021 will mark 20 years the terrorist attacks happened at the Pentagon, World Trade Center, and in Shanksville, PA. Since that day in 2001, men and women across the country answered the call to serve – including Syracuse University Army ROTC cadets. While some were already in the service when 9/11, and some joined the service after, both have telling stories and reflections to share as we look back on that tragic day and the Global War on Terrorism.

Col. William Start, a 1993 Syracuse University/SUNY College of Environmental Science and Forestry (ESF) graduate, has served 35 years in the Pennsylvania Army National Guard. Start was an ROTC cadet during the Gulf War and thought, at the time, it was a bit far-fetched to think the National Guard would be called to support. A few years after graduating, in 1996, he was called to deploy on a two-day notice as a BDE Fire Support element to Bosnia’s Implementation Force (IFOR). After 9/11, Start notes the need for the Reserve increased.

“It started with securing Ground Zero, the airports, and power plants. Then they started deploying united for security in Europe and Bosnia, and then company-size units to Afghanistan and Iraq,” he said. “With trust, National Guard battalions and brigades were sent to combat zones … 9/11 was a very dark time in our county’s history but fighting a common enemy for two decades has brought the whole Army together.” Stuart notes in this past year and a half, soldiers continue to deploy on top of what happened on 9/11 as soldiers are called to provide COVID testing, inauguration security, multiple riot control missions, training, warfighters, National Training Center (NTC) rotations. “We are still deploying as much as ever.”
Despite the hardships, Stuart said it’s an honor to serve with generations of selfless soldiers and taking care of soldiers and watching them step up to answer the call. “I am humbled to know that we are training the future generations to take on the mission, just as we were trained to receive the mission from the generation before us. It’s humbling that this has been going on for almost 250 years in my hometown and across the nation,” he said.

Brig. Gen. Todd Lazaroski, also a 1993 graduate of Syracuse University/ESF, has served over 28 years in the U.S. Army Reserve. He served before, during, and after the terrorist attacks, saying they were “a catastrophic event that shaped warfare for decades to come.” 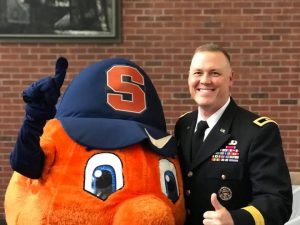 Lazaroski emphasized how the 9/11 attacks redefined so many strategies and doctrine. With the recent war events, we will see another change. “The spectrum is very wide in terms of how the U.S. Army has changed from 1993 to today – but there is always one constant, and that is change,” he said.
Lazaroski is currently the Commanding General of the 87th Training Division.

Lt. Col. Brian McGarry graduated Syracuse University in 2002 where he commissioned as a second lieutenant and would go on to serve in armor, as a quartermaster, and in military intelligence. What else was unique about his graduation year, was his class was the first one to graduate after September 11, 2001.

McGarry had just started his senior year at Syracuse and was sitting in a class in Maxwell when he heard the commotion in the hallway. “I got up to see what was going on and a small group of students had stopped in the hallway where a TV was playing CNN. We watched for quite a while, and I remember the disbelief I felt when I saw the first tower fall,” he said. “I knew that any expectations of how I thought my time in the Army would be collapsed along with those buildings. I told Christy that everything had just changed, and she cried because she knew we would soon be at war.”

By the time McGarry got to the Armor Basic Officer Leaders Course (ABOLC), the way to the war in Iraq was well underway. “It added a whole new level of seriousness and gravitas to what you were doing,” McGarry said. “I showed up at Fort Riley at the end of February 2003, and just a few weeks later, I was in Iraq with my battalion, part of the invasion rolling north as the armor support for the 101st (Airborne Division).”

Like many others, McGarry said 9/11 lead him to a very different career experience than he expected when he signed up for ROTC. “I definitely thought I was going to do my four years and be done, but here I am almost 20 years later still in uniform. It really did change everything.”

In 2015, Capt. Jordan Hartwig commissioned from Syracuse University in transportation corps and is now currently a logistics officer. He has six years of service under his belt. The war had been going on for approximately 10 years when he began his Army ROTC journey.

Hartwig said no one in particular inspired him to serve, but he always felt a calling to do so. “Growing up I loved military history and wanted to be a part of something bigger and more meaningful, so serving my country felt like a natural fit,” he said. “I was on the edge about serving until my senior year of high school when I decided I would never forgive myself if I missed the opportunity to serve.” Hartwig said he then signed up and hasn’t never once regretted the decision.

On this 20th anniversary of 9/11, Hartwig says that day is “a constant reminder that the threat to our country is real, and when something happens, our country will not ask if we are ready to fight – they will expect us to be … We have to be ready to fight now with the equipment we have. I always lead with this mindset and try to instill it in others.” 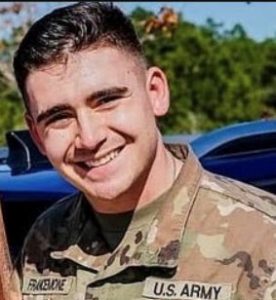 Since he was so young when 9/11 occurred, Francemone entered the Army in 2019 and began his service almost two decades later. He said there is a culture gap between those who served in Afghanistan and those who did not. “As a leader coming into the Army and not getting the opportunity to deploy as your subordinates have, you must identify other ways to remain relevant and separate yourself.”

Especially with the recent Afghanistan crisis, Francemone said it’s important to identify and understand the differences between those who served in that type of environment and those who did afterwards. “Empathize with the situation and find other ways to separate yourself from your peers … what you cannot get in deployment experience, make up for in other ways.”