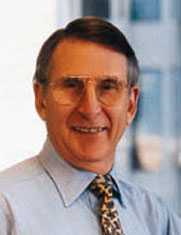 Arthur Rock was born just up the road from Syracuse in Rochester, New York in 1926 as the son of a Russian immigrant and a first-generation American mother. His father owned a candy store in Rochester, and Arthur has described his upbringing as one of financial hardship, “We were lower middle-class.”

Arthur was drafted into the U.S. Army in 1944, but never served overseas since World War II had come to an end by the time he completed training. Utilizing the benefits from the GI Bill, he attended Syracuse University and earned his Bachelor’s degree in Business Administration. Later, he pursued a M.B.A. at Harvard Business School in 1951. He has since credited the G.I. Bill as the sole reason he was able to pursue higher education after his time in the Army.

Upon graduation from Harvard, Arthur moved to New York City. There, he began a successful career in corporate finance. Starting as a securities analyst, he quickly moved up in the ranks to join Hayden, Stone & Company in New York. There he gained experience in raising funds for emerging technology companies.

Though he has not been given due credit over the years, Arthur was instrumental in the early days of new technology; he was one of the first venture capitalists who invested in a region in California that we now know as Silicon Valley. He helped to launch and fund early technology companies like Fairchild Semiconductor, Intel, Scientific Data Systems, Teledyne; not to mention becoming a member of the board of a little company called Apple Computer.

Today, Arthur has retired from corporate life, and spends most of his time giving back as a philanthropist. Along with his wife, Toni Rembe, he founded the Rock Center for Corporate Governance at Stanford University. His hope for this center is to encourage and teach ethical corporate responsibility to upcoming generations, and founded it in the midst of the Enron crisis. His colleagues have described Arthur as someone who is “wicked smart and has an unbelievable sense of integrity,” truly a testament to his character and dedication towards ethical responsibility.

Arthur Rock is an alumnus of Syracuse University and a veteran of the U.S. military. You should know his story.