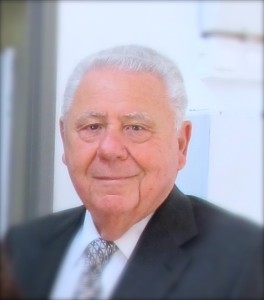 A man with a vision of expansion and philanthropy, Bernard “Bernie” Kossar started his journey in higher education. He graduated from Syracuse University with his Bachelor’s of Science degree in 1953, followed by his law degree in 1955 from the SU College of Law. Upon graduation he served in the United States Marine Corps, stationed in Camp Lejeune in ’57.

After his service time, he continued to practice law in the civilian sector. From 1960 to 1965, Kossar worked with the firm of Van Buren, Schreiber & Kaplan. His experience in law working for Van Buren, Schreiber & Kaplan, in addition to the skills he developed while at SU’s College of Law, provided him with many opportunities, including his tenure from 1965 to 1978 as  President and Chief Operating Officer (COO) of Franklin Stores, which operated 278 retail apparel and discount department stores throughout the United States. After a successful thirteen years at Franklin Stores, he continued to improve other corporations, becoming the  President and COO of Vornado, a company engaged in retail and real estate ventures from 1978-1980. By 1981, Kossar was President and the COO of Regal Accessories and Special Advisor to the Chairman and CEO of Great Atlantic & Pacific Tea Company, but left a year later to serve as a Senior Vice President in W.R. Grace & Company’s retail group.

In 1984, the chemical manufacturing company, W.R. Grace & Co., decided to enter the home improvement retail business by creating an American Chain of “big box” home improvement stores named Home Quarters Warehouse (HQ). Kossar, with Frank Doczi, became the head of this new chain, based in Virginia Beach, VA. As founder, Chairman and CEO, Kossar purchased from NYSE-listed W.R. Grace & Co. and sold it later to Hechinger. Four years later, Kossar moved on to found OW Office Warehouse, an office supply store that used a logo and branding similar to HQ. From 1988 to 1994, Kossar was Chairman of the Board and Chief Executive Officer. The OfficeMax division of K-Mart Corporation in 1994 later acquired OW Office Warehouse.

In the early 2000s, Bernard R. Kossar was still full of entrepreneurial ambition, founding the Millennium Partners, LLC, a private investment partnership focused on investment opportunities. He served for over 20 years as a principle. Within that era, he also invested time in philanthropy. For example, in 2003, he helped build the Israel Air Force Center Foundation (IAF) and has been a proud supporter for nearly a decade. In 2010, Kossar joined Augme Technologies’ Advisory Board, a leading developer and provider of patented and innovated smart mobile marketing technology. In 2011, he was presented with the Whitman School of Management’s Distinguished Service Award. Kossar’s service and support is evident also with his recent work with the Tel Aviv-Yafo Foundation, an international fund-raising arm of the City of Tel Aviv-Yafo, the epicenter of Israel’s economy. Kossar focused his efforts on educational reform by dedicating three new projects to the foundation: a resource center for the Nofei Yam Elementary School, a fitness center for the Tkuma Special Education School, and a new elementary school in Palm Beach and Boca Raton, Florida. As the Major of Tel Aviv-Yafo stated, “For decades now, this remarkable family has been on the forefront of important municipal development: building kindergartens, libraries, daycares, and home environment centers in the lower income neighborhoods…improving the lives of Israel’s young generation.” Kossar’s philanthropy has proven to have an international outreach.

Currently, Kossar is a Trustee, active Board of Advisors member, and guest lecturer at Syracuse University, his alma mater. He also serves as a member of the Board of Directors of the Tel-Aviv Foundation-American Committee, amongst many other companies and corporations.

Bernard R. Kossar is an alumnus of Syracuse University and a veteran of the U.S. military. You should know his story.