Brian Bauer: A Life Changed by an Experience Abroad

Brian Bauer ’22 has never been one to back down from a challenge. Whether it is the physical exertion from 6 a.m. training sessions with his fellow Army ROTC cadets at Syracuse University or learning a new language, Bauer enjoys pushing himself to his limits. 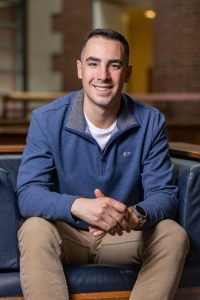 The junior from Ocean Township, New Jersey, is studying international relations at the Maxwell School of Citizenship and Public Affairs and Chinese language through the College of Arts and Sciences. Since arriving at Syracuse, he’s taken advantage of many opportunities presented to him—he joined Army ROTC, where he learns discipline; he’s a member of a fraternity, which has expanded his social circle; and he is a member of the American Red Cross Club, which helps him give back to the community.

Bauer is on the Forever Orange Student Alumni Council, which has connected him with alumni and shown him the power of the Syracuse University network. He’s received career advice from alumni who are now lawyers, and he was set up with an internship in Hong Kong through an alumnus. “It’s nice to know alumni and learn how much they do for the school,” he says. “You get an idea of what helps Syracuse become Syracuse.”

Serving his Country and Community Now and Beyond Link

Bauer has always had the “urge to serve” his country. For his fifth-grade class, he had to write what his career goal was, and he said he wanted to be an officer in the Army. But it wasn’t until he received the Army ROTC scholarship that he really could put that dream into motion. Being a scholarship recipient made him want to work even harder to prove that the selection committee made the right decision. “All those strangers who were part of that Army family who have invested in me really make me push myself to do well,” he says.