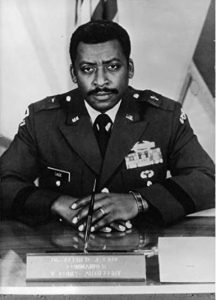 Born in Fayetteville, North Carolina, Alfred Cade grew up in the South during a period of turmoil and unrest for African Americans. He left North Carolina to attend Virginia State University, a historically black university in Petersburg, VA, where he graduated with a Bachelor’s of Science degree in Psychology in 1952 and was a cadet in the Army Reserve Officer Training Corps (ROTC). Soon after his graduation, Cade entered the United States Army, where he was primarily stationed in Vietnam. While in Vietnam, he served in many posts, including as a commander of the 1st Battalion, 92nd Field Artillery. Due to his excellent leadership with the 1st/92nd, Cade was promoted to the Senior Province Advisor-Military Assistance Commander (MACV) and Artillery Battalion Commander in South Vietnam. Midway through his 26-year service with the United States Army, Cade attended Syracuse University’s School of Management, where he graduated with a Master’s in Business Administration in 1965. Soon after his graduation from SU, Cade was promoted to management positions within the Army, such as the Comptroller for the United States Army Material Development and Readiness Command (DARCOM). At DARCOM, Cade managed more than $14 billion in acquisition funds.  Cade’s career with the Army ended in 1978, when he retired as a Brigadier General.

Although Cade retired from the Army, his career hasn’t ended there. In 1979, Cade entered the private sector and joined Caesar’s World, Inc., becoming an integral part of the senior management team for Caesar’s Atlantic City Resort and Casino in New Jersey. While at Caesar’s, Cade was responsible for all personnel oversight, from employee training to licensing and organizational relationships. Cade would have a prosperous career at Caesar’s, leaving the company in 1996 as the Senior Vice President for Government Relations. This experience of working with government led Cade to join the New Jersey Commission on Higher Education as its chairman. While serving on the Commission, Cade helped lead New Jersey through a restructuring phase of its higher education system, pushing for student rights and affordability. Cade also served on the Boards of Trustees of Rowan University in New Jersey, Atlantic Cape Community College, also in New Jersey, and Virginia State University, his alma mater.

Cade has remained very connected to Syracuse University, having served on the School of Management’s Corporate Advisory Board, in addition to being awarded the Outstanding Alumni Award by SU in 2001. His list of other awards include an honorary doctorate from St. Peter’s University in New Jersey and the Bronze Star and Legion of Merit from the United States Army.

Brigadier General Alfred J. Cade is an alumnus of Syracuse University, and a veteran of the U.S. military. You should know his story.