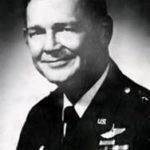 Brigadier General Garry A. Willard, Jr. is an alumnus of Syracuse University, and also a military veteran. You should know his story, because it’s a Syracuse University story—one that speaks to our past, our present, and our future.

Garry Willard is a perfect example of a Central New York Hometown Hero, growing up in Utica and later attending Syracuse University. After his high school graduation, Willard completed preparatory school at the Oak Ridge Military Institute in North Carolina in 1944. Immediately after, Willard enlisted in the Army Air Corps and was assigned as an infantryman with Headquarters 24th Corps in the Korean Army of Occupation in 1946. Willard was discharged in 1948, only to reenter active duty later that year, when he earned his pilot wings and was commissioned as a second lieutenant. He served as a fighter pilot with the 60th Fighter Squadron at Otis Air Force Base in Massachusetts for two years before again being relieved from active duty.

Starting in 1950, Willard served with the 138th Fighter Squadron of the New York National Guard while attending Syracuse University. Willard graduated from SU in 1952 with a Bachelor’s of Science Degree in Business Administration. After he finished his studies at SU, Willard was called back into action, this time returning to Korea as a fighter pilot with the 25th Fighter Squadron. During his service in Korea, Willard completed 100 flying missions in F-86 aircraft. Willard would go on to serve as a pilot in Louisiana and Utah before becoming a Flight Commander and Assistant Wing Operations Officer with the 83rd and 4th Tactical Fighter Wings at Seymour Johnson Air Force Base in North Carolina from 1956-1960. Always one to respond to the call of duty, Willard was again deployed, this time to Vietnam, where he served with the Military Assistance Advisory Group in Vietnam as an A-IH Skyraider pilot and as commander of the Air Base Advisory Team at Bien Hoa in South Vietnam. He served in South Asia for five years from 1960 to 1965 in Vietnam, Okinawa, and in Hawaii as a fighter pilot. He later served another combat tour in Thailand in 1965, completing more than 100 combat missions with over 250 combat hours.

During his tours in Southeast Asia, Willard proved his leadership and management abilities to a great extent. Due to these strengths, the Air Force stationed him at Nellis Air Force Base in Nevada, where he helped organize and eventually commanded the first Wild Weasel Training Squadron. He would serve in this post for about three years before joining the Directorate of Operational Requirements at the Air Force Headquarters in the Pentagon, where he worked on the Wild Weasel Program and as a program monitor for the F-15 air superiority fighter. While in Washington DC, Willard received a Master’s of Science in International Affairs from The George Washington University in 1970 and attended the National War College.

Willard acted in commanding posts with the 23rd Tactical Fighter Wing in Kansas and the 314th Air Division in South Korea over a period of three years. He later served at Robbins Air Force Base in Georgia for a year as Vice Commander of the Warner Robbins Materiel Area and as Deputy Chief of Staff for plans and operations at Air Force Logistics Command, located at Wright-Patterson Air Force Base in Ohio. Before being transferred to the Air Force Inspection and Safety Center, Willard served as Deputy Assistant Chief of Staff for Plans and Operations at the United Nations Command/United States Forces in Seoul, South Korea from 1975-1977. His last post was as Director of Aerospace Safety at the Air Force Inspection and Safety Center at Norton Air Force Base in California. Here, Willard was able to combine his extensive experience as a pilot with the management skills he refined and developed at Syracuse University. Retiring in 1980, the hometown hero from Utica, NY had worldwide responsibility for all policies, standards, and procedures for Air Force safety and their implementation.

Willard’s career was certainly impressive, from his start as an enlisted member of the Army Air Corps to a Brigadier General in the U.S. Air Force. He was a command pilot with more than 5,700 flying hours. His military decorations include the Legion of Merit with oak leaf cluster, the Distinguished Flying Cross with oak leaf cluster, the Bronze Star Medal and the Meritorious Service Medal, and the Presidential Unit Citation with three oak leaf clusters, in addition to the Republic of Korea Presidential Unit Citation.

Brigadier General Garry A. Willard, Jr.  is an alumnus of Syracuse University, and a veteran of the U.S. military. You should know his story.