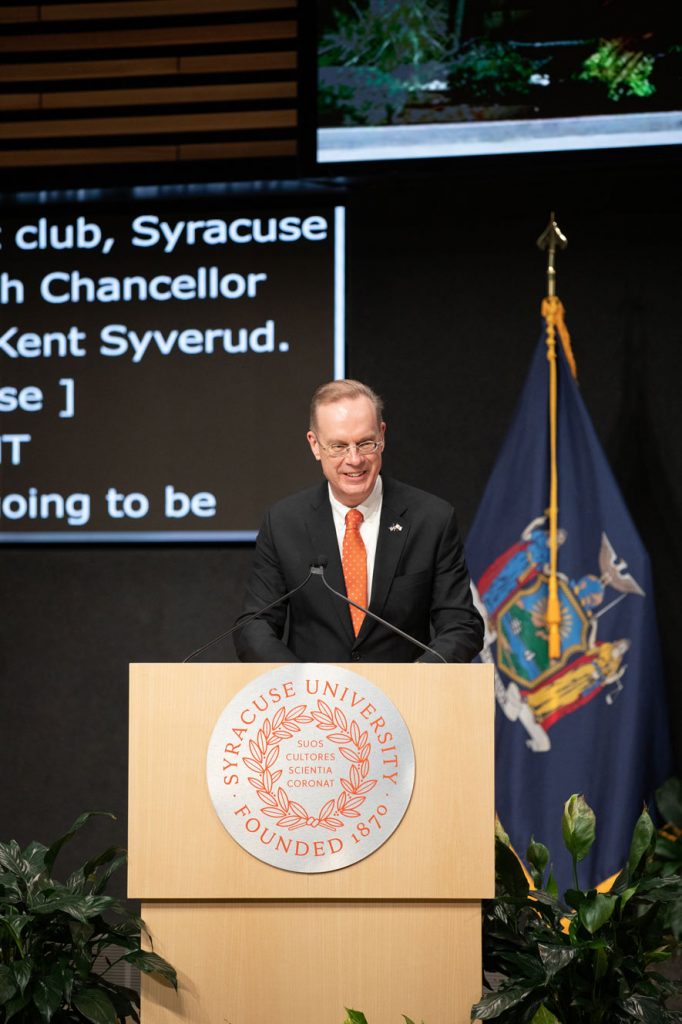 The Nov. 3 dedication of the Daniel and Gayle D’Aniello Building, home of the National Veterans Resource Center (NVRC) at Syracuse University, was a tribute to the past, a celebration of the present and a promise for the future to military veterans and their families.

END_OF_DOCUMENT_TOKEN_TO_BE_REPLACED

Operation Green Light is a new collaborative initiative to support veterans of all military conflicts, with a special emphasis on the veterans of Iraq and Afghanistan, as well as raise awareness about the challenges faced by many veterans and the resources that are available at the county, state, and federal level to assist veterans and their families.

As a military spouse of 16 years, Bana Miller ’04 knows a thing or two about moving due to assignments. She recently made her fifth move in seven years—this time to Seattle, where her husband, Lt. Col. Matt Miller, is now stationed. She’s not worried though. She’s found the military community to be welcoming in each new city, offering a sense of comradery.

END_OF_DOCUMENT_TOKEN_TO_BE_REPLACED

Collins was the second woman ever accepted to the prestigious Air Force Test Pilot School at Edwards Air Force Base in California. Upon graduation in 1990, NASA selected her for the astronaut program. At NASA, she famously became the first woman astronaut to both pilot (1995) and then command (1999) a Space Shuttle mission.

While a grand opening celebration in April 2020 was sidelined due to the pandemic, the University’s National Veterans Resource Center (NVRC) at the Daniel & Gayle D’Aniello Building will be officially dedicated on Wednesday, Nov. 3. The campus community is invited to attend the event, which will take place from 3 to 4:30 p.m. in the K.G. Tan Auditorium at the NVRC.

END_OF_DOCUMENT_TOKEN_TO_BE_REPLACED

One of the longest consecutive running programs of its kind in the country, Syracuse University’s Reserve Officers’ Training Corps (ROTC) trains students to commission as officers in the Army and Air Force. Over the course of their training, cadets are accessed on a wide variety of metrics, including grade point average, physical fitness and leadership. Recently, cadets from both the Army and Air Force received their final assessments and national rankings. Several members from Syracuse University’s Army and Air Force ROTC cadets received prestigious designations and were among the top-ranked cadets in the country.

James was assigned to the 1st Battalion, 12th Infantry Regiment, 4th Brigade, 4th Infantry Division, at Fort Hood, Texas. He served as a tank platoon leader and deployed with his unit in support of Operation Iraqi Freedom. On September 27, 2006, First Lieutenant James N. Lyons was shot and killed in southern Baghdad, Iraq while his unit was attacking insurgents that had attacked a key strategic facility. At the time of his death, James was Syracuse University’s first known and youngest casualty of Operation Iraqi Freedom. His awards and decorations include the Bronze Star Medal, Purple Heart Medal, Meritorious Service Medal, Iraqi Campaign Medal, the Global War on Terror Medal, among others.

This event has been canceled.

The National Veterans Resource Center (NVRC) will host its first-ever military-themed Living Library on Nov. 15 from noon-5 p.m. Military-connected volunteers from across the campus and community will act as “living books,” representing a range of cultural backgrounds, talents and life experiences serving in or supporting someone serving in the military. “Living books” will share their stories on various topics with “readers” who engage in one-on-one conversations or small group settings.