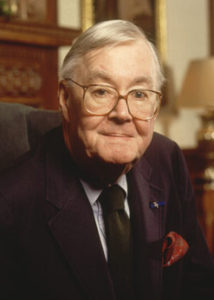 Daniel Patrick Moynihan was born in Tulsa, Oklahoma and grew up with humble beginnings as a shoe-shiner in New York City. He attended public and parochial schools in the city, ultimately graduating from Benjamin Franklin High School in East Harlem. Before he began college, he worked as a longshoreman on the piers. After his first year of college at City College of New York, he entered the U.S. Navy.

Moynihan served as an active duty sailor from 1944 to 1947, last serving as a gunnery officer on the USS Quirinus. After leaving the Navy he went on to earn his M.A. and Ph. D. in Sociology from the Fletcher School of Law and Diplomacy at Tufts University, and then later studied economics at the London School of Economics as a Fulbright fellow.

Daniel enjoyed an impressive career working in the Executive Branch of government, serving under four different U.S. Presidents in a number of capacities. Notably, as a member of the Kennedy and Johnson administrations, Daniel served as the Assistant Secretary of Labor for Policy Planning and Research, dedicating much of his efforts to eliminating poverty in the United States. Under President Nixon, Daniel was appointed as Counselor to the President on Urban Affairs. During this time, Daniel was instrumental in bringing issues of acid rain and the greenhouse effect to the attention of NATO as pressing concerns for the future and for social policy research. Daniel then pursued a career in international diplomacy, first working tirelessly as the US Ambassador to the United Nations and then to India. In 1976 Moynihan was elected to the US Senate to represent the state of New York, and held that position until 2001.

During his career, Daniel Patrick Moynihan was held in high esteem by his colleagues for his commitment to bipartisanship, and for his ability to identify and enact innovative and novel solutions to the most pressing problems of the day. He is remembered for his affinity toward seersucker or tweed suits, and for exhibiting a flair for captivating speeches.

After leaving the Senate, Moynihan joined the faculty at the Maxwell School of Citizenship and Public Affairs at Syracuse University.

Daniel passed away in 2003 from complications of a ruptured appendix. In 2005, the Maxwell School honored him by renaming the Global Affairs Institute as the Moynihan Institute of Global Affairs.

Daniel Patrick Moynihan was a faculty alumnus of Syracuse University, and a veteran of the U.S. military. You should know his story.