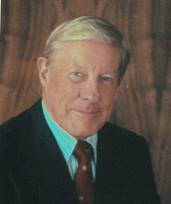 Born July 14, 1917 in Schenectady, NY, MacNaughton attended Syracuse University on a basketball scholarship and received his bachelor’s degree in 1939. Not long after graduation, McNaughton joined the U.S. Army Air Corps and served in the South Pacific during World War II. Naturally, at war’s end, 1st Lieutenant McNaughton returned to Syracuse University to earn a law degree in 1948.

McNaughton launched his career as an attorney just north of Syracuse in Pulaski, NY. After six years, he took a position with Prudential as an associate legal counsel and eventually rose to become its 10thPresident and Chief Executive Officer. During his leadership tenure, Prudential expanded its real estate investments, diversified into auto and home insurance, plunged into the international marketplace ahead of its competitors, and tripled annual sales in life insurance to $43 billion.

In 1978, after serving as CEO for nine years, MacNaughton left Prudential to lead the Hospital Corporation of America (HCA Inc.), one of the nation’s largest for-profit hospital chains. Later in 1982, MacNaughton stepped down as its president, though stayed on as chairman of HCA’s executive committee. MacNaughton also served on the boards of HealthTrust and Mountain View Hospital, Inc. and was a Syracuse University College of Law trustee from 1977-2002.

In addition to his wide recognition as a prominent leader in the insurance and health care industries, Donald S. MacNaughton, Jr. received numerous Syracuse University and national honors. He received Syracuse University’s Letter Winner of Distinction for basketball in 1968 and, a year later, the George Arents Pioneer Medal, SU’s highest alumni award. McNaughton also received an honorary degree from Saint Peter’s University in 1976. In 1979, he was nominated as an advisory member of the National Commission on Social Security, a study charged by Congress and comprised entirely of private citizens to evaluate social security system.

Beyond his storied career, MacNaughton and his family have left a permanent mark on Syracuse University. His legacy lives on through his children and grandchildren, two of which (Donald and David) are also highly successful Syracuse University graduates. In addition, SU’s Winifred MacNaughton Hall was dedicated in his wife’s name in 1998.

Donald S. MacNaughton, Jr. is an alumnus of Syracuse University and a veteran of the U.S. military. You should know his story.