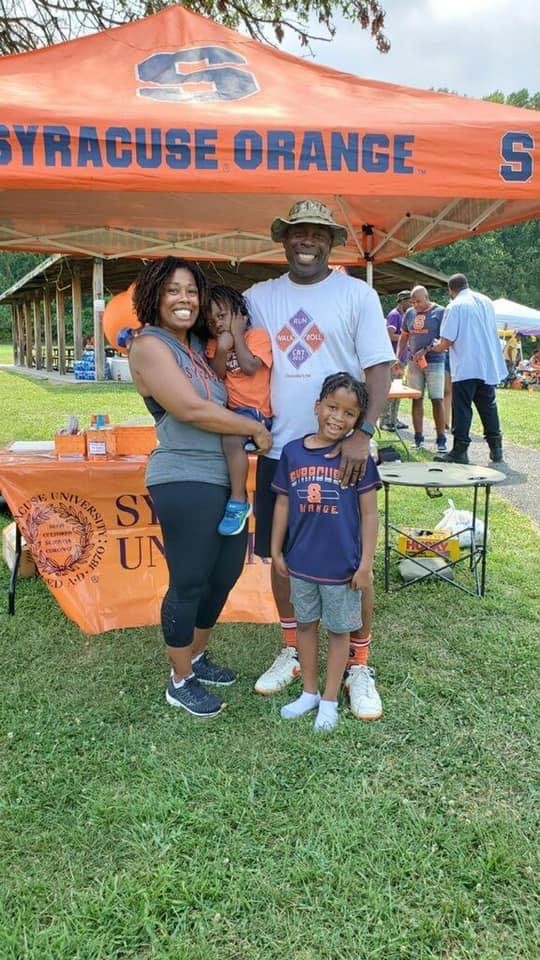 In 1997, Dwayne graduated from Syracuse University with undergraduate degrees in Sociology and Information Studies. The same year, he enlisted in the U.S. Army as at 25B (Information Systems Analyst). Dwayne was commissioned as a Signal Officer in 1999 after attending Officer Candidate School at Fort Benning, Georgia. Alison graduated in 2001 from the former Syracuse University School of Nursing and was commissioned in the Nurse Corps as a Second Lieutenant from the University’s Stalwart Battalion Army ROTC program.  Team Murray bleeds Syracuse Orange to their core. While studying on “The Hill”, Dwayne ran track and field for the Orange and Alison was a member of the Orange cheerleading squad.

Despite being on campus at the same time, Dwayne and Alison’s paths never crossed at Syracuse University. They met while stationed in the Republic of Korea with the U.S. Army and were married in 2009. Their military careers have spanned over 20 years of service to our nation and have taken them to places such as Germany, Maryland, Texas, and Washington state and deployments to Iraq, Afghanistan, and Bosnia-Herzegovina.

Dwayne’s proudest military moment was commissioning his first class of ROTC cadets to Second Lieutenant this past May at Alabama A&M University. Alison’s proudest moment of her military career was serving as the Chief Information Officer and Chief Medical Information Officer for Brooke Army Medical Center in San Antonio, Texas, the only Level One Trauma Military Treatment Facility in the Department of Defense.

Today, the Murray’s continue to serve our nation on active duty. Dwayne is the commander of the Alabama A&M University Army ROTC program in Huntsville, Alabama, and Alison serves as the Chief Medical Information Officer at Fort Gordon, Georgia. Along with them on this amazing Orange journey, Team Murray have three outstanding children, Dwayne the 2nd, Caleb, and Malachi.