When Dwayne Murray ’97 was about seven years old, his grandmother bought him a Syracuse University sweatshirt from the Salvation Army. Born in Brooklyn and raised between the Bronx and White Plains, N.Y., Murray lived with his grandparents for his first 12 years. When his grandmother passed away, that sweatshirt became one of his dearest possessions. 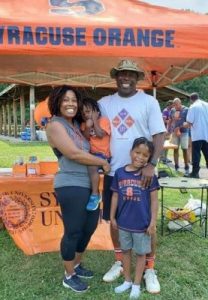 “Growing up in the New York metro area, there’s instantly an identifiable passion for anything Syracuse University,” he says. “I’ve always felt a gravitational pull in my heart just to be in that space.”

Today, “Team Murray,” which includes Dwayne, his wife Alison ’01 and sons Dwayne II, Caleb and Malachi, is feeling that pull and seeing Orange as they set their sights on a return to Syracuse this June.

“I speak with the authority of my family team,” he says. “Team Murray is bought in. We love Syracuse. We love this school.”

Murray also speaks with unbridled enthusiasm for his new role as the deputy director of the Office of Veteran and Military Affairs (OVMA). The job is especially suited for his experience, abilities and profound passion for service, students and Syracuse.

“This opportunity screamed at me. It aligns with my passion, which is being a soldier and supporting and mentoring soldiers. It also aligns with my purpose, which is higher education and working with folks who want to accomplish their dreams,” he says. “To be on campus and advocate for first-generation students, student-athletes, military-connected students—people like me—is just as great an honor as serving our nation in uniform.”

Read The Full Story And Learn More About Murray