A chance meeting on the other side of the world in Bali, Indonesia, proved to be a pivotal step in the journey Emily Graham ’22 took to Syracuse. It prompted her to see what the University offers for veterans, and she would not be disappointed. 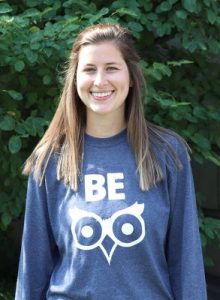 As a Navy Corpsman, Emily trained in San Antonio, Texas, before assignments at Walter Reed in Bethesda, Maryland, and the Naval Medical Center in San Diego, California, during her six-year Navy career. Her husband Nicholas came with her to every post and completed his undergraduate education fully online. When he was admitted to Syracuse Law School, Emily had one year left in her military commitment. Nicholas deferred entry for a year while Emily finished her service and considered options in higher education. She had started her nursing degree and was planning to become a public health nurse but didn’t have a great passion for the nursing part so much as the public health part. That’s when she and Nicholas went on their trip to Bali.

“We saw a man with a Syracuse shirt on, which is unusual to see in that part of the world,” she says. “When we talked to him, it turns out he was on the board of directors for the IVMF [D’Aniello Institute for Veterans and Military Families]. He said I have to check out Syracuse. I was pretty dead-set on going to nursing school to become a public health nurse, but I looked into Syracuse’s public health program because of him. I’m glad I made the decision to switch.”

“My advisor Maureen Thompson is incredible. She’s always been really communicative and such a great contact,” Emily says. “She sat down with me and found how I could utilize credits from my military experience, and we created a whole schedule from when I started through graduation.”

Emily graduates this May from the Falk College of Sport and Human Dynamics with a degree in public health with a concentration in health education. She has one year left in her 4+1 program and plans to finish her master’s degree next year. She and Nicholas have embraced life on campus as military-connected students. One interesting aspect of their post-service lives is they have taken up beekeeping. Emily says she appreciates how inclusive Syracuse has been for military spouses like Nicholas, as well as for older, non-traditional students, because she realizes spouses give up a lot to follow their service members. Importantly, Emily also has found meaningful connections through the veteran and public health communities on campus.