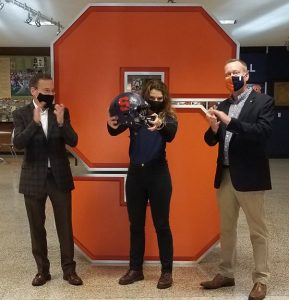 In 2017, Sergeant Showers volunteered to join the 10th Mountain Division’s Main Command Post Operational Detachment. There she served as an Administrative NCO for two years in preparation for the division’s deployment to Iraq.

Felicia deployed to Camp Taji (say: Tah-gee), Iraq in 2018 with the 10th Mountain Division serving as an Operations NCO and Geospatial Intelligence Advisor. For her overseas deployment, she was awarded the Joint Service Commendation Medal, Inherent Resolve Campaign Medal, and the Global War on Terrorism Service Medal.

Today, Felicia attends Syracuse University on an Army ROTC “Minuteman Scholarship” and she is pursuing her Bachelor of Science degree in Nutrition from the David B. Falk College of Sport and Human Dynamics. She continues to serve in the NY Army National Guard and plans to commission as a Field Artillery Officer.