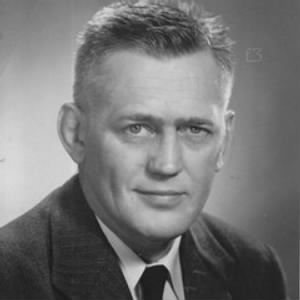 Floyd Benjamin “Ben” Schwartzwalder was for 25 years a teacher, a mentor, and a coach at Syracuse University.  He was also a military veteran. You should know his story, because it’s a Syracuse University story – one that speaks to our past, our present, and our future.

Ben Schwartzwalder grew up in West Virginia, and developed into a superb athlete (a standout wrestler and football player, both in high school and college).

By any definition, during the war Ben distinguished himself in service to the nation, and to his men.  As a paratrooper with the 82nd, he was among the first wave of soldiers that jumped on D-Day in 1944. Dropped far behind enemy lines and miles off target, Ben, a Captain in Company G of the 507th, organized his men, established command, and a week later delivered a large group of prisoners to the Allied lines.  For his actions during the invasion, Ben was awarded a Silver Star, a Bronze Star, a Purple Heart, four battle stars, the Presidential Unit Citation, and was promoted to the rank of Major.  He was personally decorated by the commander of the 82nd, the legendary General Matthew Ridgeway, who recalled saying to Ben “I never expected to see you here to receive this award.”

After the war, Ben came back to coaching, and eventually found his way to Syracuse University. About coming to Syracuse, Schwartzwalder famously said: “The alumni wanted a big-name coach. They got a long-name coach.” And while maybe the alumni didn’t get the ‘big name’ coach, Floyd Burdette “Ben” Schwartzwalder gave SU its finest hours in football, becoming the most successful football coach in the University’s history.

Under Ben’s leadership, SU produced 22 straight years of non-losing football.  Coach Schwartzwalder led the SU team to an impressive record of 153 wins, 91 losses, and 3 ties, including seven bowl games, and the only National Championship in SU’s history (1959 undefeated team).  He also developed some of the most impressive running backs the game has ever seen – Jim Brown, Ernie Davis, Jim Nance, Floyd Little and Larry Csonka.

Ben passed away in 1993 and is buried in the Onondaga County Veterans Memorial Cemetery. He is part of Syracuse University history, and a veteran of the U.S. military. You should know his story.