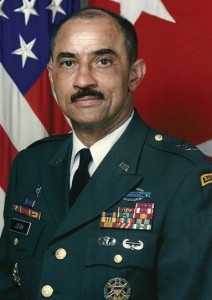 Fredric H. Leigh was born in 1940 in the Midwest city of Dayton, Ohio. Leigh attended Central State University, a historically black university in Wilberforce, Ohio. He graduated from CSU in 1963 with a Bachelor’s of Arts in History in 1963 and received his commission from the Army Reserve Officer Training Corps (ROTC) program the same year. After being commissioned as a second lieutenant, Leigh began his Army career as an infantry platoon leader, serving two tours in Vietnam.

Leigh believes that it is his experiences leading the 1st Infantry Division and the 101stAirborne Division in Vietnam that shaped his leadership style the most. He remarked in an interview with Syracuse University Magazine that “The Vietnam experience underscored for me how important it is to maintain the dignity of people… If you preserve a man’s dignity and signal caring confidence in them, they will be there when you need them.” These leadership lessons were critical for Leigh’s successes in the Army for the rest of his career.

After his return from Vietnam, Leigh came to Syracuse University, where he graduated in 1972 with a Master’s of Science in Public Relations-Journalism from the famed S.I. Newhouse School of Communications. Leigh later attended the US Army Command and General Staff College, where he earned a Master of Military Science. From here, Leigh continued to climb the ranks of management and leadership positions in the US and abroad, from his role as Chief of Staff for the 19th Support Command of the 8th US Army in South Korea to Commander of the 1st Brigade of the 101st Airborne Division at Fort Campbell in Kentucky. The US Army, recognizing his exceptional management and leadership skills and attributes, transferred Leigh to the US Army War College, where he served as Director of Senior Leadership Research (now the Center for Strategic Leadership and Development). Before his final assignment to the Office of the Chief of Staff of the Army, Leigh was assigned the position of Deputy Director of the National Military Command Center at the Pentagon.

Leigh’s last assignment before retiring from the Army in 1994 was as Director of Management in the Office of the Chief of Staff of the Army. While here, Leigh was the Chief of Staff of the Army’s head advisor on overall Army management objectives, concepts, policies, and programs. He was also responsible for oversight of the RAND-Arroyo Center, the military policy branch of the RAND Corporation.

After retirement, Leigh served as the Executive Vice President and Chief Operating Officer (COO) of the Joint Center for Political and Economic Studies, a Washington DC. based think tank that focuses on policy issues from the perspective of Americans of color. Currently, he serves as co-founder and executive director of Taia Peace Foundation, a non-profit working in Sierra Leone on socio-economic development.

Major General Fredric H. Leigh is an alumnus of Syracuse University, and a veteran of the U.S. military. You should know his story.