Army Cadet Caley Susitti and Air Force Cadet Hope Spencer are training to commission as second lieutenants as part of Syracuse University’s Army and Air Force Reserve Officer Training Corps (ROTC). However, these cadets do not attend Syracuse University. ROTC has produced more than 40% of the active-duty officer corps in part because separate intuitions will often work together. Thousands of colleges enter into cross-enrollment agreements with schools like Syracuse that offer ROTC programs. These agreements allow cadets from other schools and colleges to train side by side with cadets at Syracuse University. These partnerships allow many of the estimated 200,000 cadets in ROTC nationwide to take their required classes on “cross-town” campuses. This year 194 total Air Force and Army ROTC cadets are in Syracuse University’s program, with partner schools like the State University of New York College (SUNY) of Environmental Science and Forestry, SUNY Oswego, Onondaga Community College, and Utica College contributing to the largest cohort in school history. Since 2018 Syracuse University’s Air Force ROTC has had an average of 54 participating cadets, and Army ROTC has averaged 104 cadets, with many of them from “cross-town” campuses like Susitti and Spencer.

ROTC is a path to become a commissioned officer in the United States Military. Other paths to becoming an officer require attending one of the five service academies (the U.S. Military Academy at West Point, New York; the U.S. Naval Academy in Annapolis, Maryland; the U.S. Coast Guard Academy in New London, Connecticut; the U.S. Merchant Marine Academy in Kings Point, New York; and the U.S. Air Force Academy in Colorado Springs, Colorado) or attending officer candidate schools which typically require a college degree. While Syracuse University is one of the hundreds of colleges nationwide that offers ROTC, it can trace parts of it’s origin to Central New York. Student Army Training Corps was activated at Syracuse University on October 1, 1918. The campus was a site for basic combat training for service members fighting in WWI.  After WWI, the unit became a permanent military department and on February 1, 1919 and became officially known as ROTC. Syracuse University’s ROTC is the longest consecutive running program of its kind in the country.

Susitti is originally from Hartland, Wisconsin. Growing up she traveled often to other states and Canada, playing club hockey. When it was time to pick a college after graduating from high school in 2018, she searched for a college that allowed her to continue to play hockey pursue a degree in criminal justice. Her search led her to Utica College. She was first introduced to Syracuse ROTC during her first year by a hockey teammate. “I thought it would be a great opportunity that would expand my skills in the civilian career path I want to pursue,” she says. Through ROTC she’s learned how to manage her time. Susitti said she would recommend ROTC to cadets because along with necessary skills cadets are also taught the importance of leadership and accountability. Susitti attends military science class and lab every Friday on Syracuse’s campus. Her goal is to have a career in federal law enforcement, like the FBI. “ROTC will help with my goal because I have learned useful skills that will set me apart from others,” she says. She would like to work in military intelligence or policing in the Army. 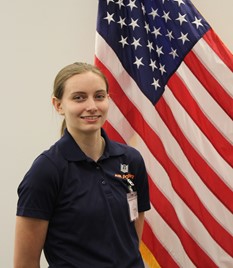 Cadet Spencer completed high school in 2019 and entered Air Force ROTC last year. Spencer attends Onondaga Community College (OCC). At OCC, Spencer earned the Lazers Top Female Scholar Athlete Award last spring and was named to the NCAA Region 3 All-Academic Second Team as a member of OCC’s women’s track and field team. Spencer says as a “cross-town cadet” she still feels a strong connection to her Air Force ROTC detachment and has learned critical life lessons from Syracuse University’s ROTC cadre. Spencer says she has learned resilience and not to look at any potential disadvantage as a barrier to success. “The road may be more rigid, but it only makes the moment of accomplishment that much more rewarding,” she says. Next semester, this “cross-town cadet” will be much closer to Syracuse ROTC, as she plans to transfer to the SUNY College of Environmental Science and Forestry (SUNY-ESF) to study Environmental Biology. SUNY-ESF shares its campus with Syracuse University. Spencer is interested in studying weather patterns as an Air Force weather officer.