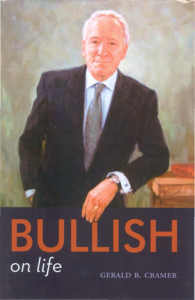 Born in Utica, New York on May 9, 1930, a year after the Wall Street crash and the beginning of the Great Depression, Gerald Cramer was the youngest of three in a family of Lithuanian immigrants. As a boy, Cramer, who deeply admired and modeled himself after his father’s strength and work ethic, thirsted for a college education. Encouraged by his parents, he applied to the prestigious Philadelphia College of Pharmacy, one of the oldest in the United States, but quickly learned that pharmaceuticals were not a lifelong interest. Instead, Cramer applied to Syracuse University and was accepted in the summer of 1948.

While attending Syracuse, Cramer held various student leadership positions and conspicuously created the Campus Leadership Scholarship with the Traditions Commission and Campus Leaders Society. He also played varsity tennis his senior year. Mr. Cramer graduated in 1952 with a bachelor’s of science in accounting from the Whitman School of Management.

He awaited a U.S. Navy commission upon graduation, and, in the meantime, applied to graduate school. Cramer was accepted to both Harvard Business School and the Wharton School of Business at the University of Pennsylvania, but ultimately chose Wharton for its one-year program. While in graduate school, however, he received orders to report to Navy Officer Candidate School and left business school to serve his country.

Ensign Cramer’s first assignment was to Korea on the sole surviving Landing Ship Tank (LST 611) during the height of the Korean War. To his relief, however, LST 611 moved to Hawaiian waters. Cramer rose quickly from damage-control officer up to executive officer, the vessel’s second officer in command, and the rank of Lieutenant. LT Cramer served three years and four months on the ship that would be named Crook County 611, known for two things: “rugged and durable people and rugged and tough terrain.” The name appropriately describes the ship and its servicemen, much like Cramer.

Mr. Cramer’s hard work and dedication have spanned nearly six decades and contributed to an impressive investment-banking career. Most notably, Cramer co-founded and was chairman emeritus of Cramer Rosenthal & McGlynn LLC, an investment advisory firm that manages more than $10 billion in assets. He has also served on numerous boards and in leadership positions for firms such as Oppenheimer & Company, Silver Lane, GOM Capital LLC, and Seavest Capital.

Like his father in many ways, Cramer was also active in philanthropic work. Cramer’s civic commitments include membership on the boards of the National Road Safety Foundation and Ripplewood Corporation, a major equity firm. Cramer also served as director of Tea Town Lake Reservation and formerly on boards at St. Joseph’s Medical Center and the Glaucoma Foundation.

Cramer also remains active in Syracuse University affairs. Since 1995, he has served on the executive committee of the Board of Trustees and has held posts as vice chairman and chairman of the investment and endowment committee. He has also served as a member of the SU School of Architecture Advisory Board and the Metropolitan New York Advisory Board. He has been a major benefactor of the Maxwell School with more than three-dozen students as recipients of Cramer Scholarships and four Maxwell faculty members with the title of Cramer Professor. Mr. Cramer has also sponsored and funded a joint program between the Maxwell School’s Institute for National Security and Counterterrorism and the International Institute for Counter-Terrorism (ICT) of the Interdisciplinary Center in Herzliya, Israel. In 2004, Cramer was selected as the first recipient of the Maxwell School Horizon Award; and, in 2006, Cramer was awarded the George Arents Pioneer Medal, Syracuse University’s highest alumni honor.

Gerald Cramer is an alumnus of Syracuse University and a veteran of the U.S. military. You should know his story.