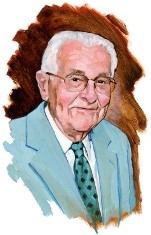 “Do the very best you can. Angels can do no better.” These are the words of Gerald “Jerry” Halpin, a visionary who would become a leading developer and businessman. In 1950, Halpin graduated with a Bachelor of Arts degree in Economics from Syracuse University, continuing to Georgetown University School of Law. During World War II, Gerald Halpin served four years in a Naval Construction Battalion. After his service in the United States Navy, he spent 15 years with the Atlantic Research Company, focused on the development of manufacturing plants in several states. He later helped build a missile launching station in Utah and developed a propellant manufacturing facility in the Outer Banks of North Carolina. In 1960, Halpin cofounded Commonwealth Capital Incorporation, which developed the first regional shopping mall, known as the Landmark Center, in the metropolitan area.

In 1962, Gerald Halpin founded Westgate Corporation and served as Chairman and CEO. He also founded more than 100 West Group-affiliated corporations and partnerships, involved in the development and management of real estate. He has overseen all departments at West Group, from financing to property management to corporate administration. In addition, Halpin co-founded the development of Tysons Corner in Virginia, being the first to build office parks in this prime site and further expanding into suburban Maryland.

Halpin’s 30 years of experience in real estate included development of hotels, resorts, residential communities, and apartments. He served as Chairman of Alexandria Management Corporation, owning six hotels and operating seven in the mid-Atlantic region at a given time. Halpin also developed a 1, 200 acre Indian Springs Ranch, known as Lost Creek Ranch & Spa in Jackson Hole, Wyoming, which his family operates as a guest resort in Grand Teton National Park. Other developments include the Bellevue Estates in Warrenton, VA, and Cottonwoods luxury resort in Scottsdale, Arizona.  Halpin has constructed, developed and managed many properties and communities; whose list continues past those mentioned and, of which, he has been recognized and honored by several awards of distinction and excellence.

In 1978, Halpin became a member of Syracuse University’s Board of Trustees and served on the Executive Committee. In 2002, he was awarded an Honorary Doctorate of Humanities degree from Shenandoah University. In 2010, at the age of 86, he was inducted into Washington’s Business Hall of Fame. Currently, Halpin serves as the President and CEO of West Group Management LLC in McLean, VA and as a founding member of Grand Teton National Park Foundation, where he serves as Chair Emeritus.

Gerald Halpin is an alumnus of Syracuse University and a veteran of the U.S. military. You should know his story.