United States Army First Lieutenant James N. Lyons hails from Rochester, New York, where he attended Brighton schools and was a part of the Brighton Fire Explorer Post 513. James graduated from Vermont Academy in 1998 and was a prolific high school lacrosse player. He was named to the all-New England team as a defenseman in his senior year. He arrived on the Syracuse University campus in 1998 as biochemistry major with aspirations of playing collegiate lacrosse for the Orange. A shoulder injury before his first year at the University sidelined his athletic dreams, but not the love for sports, traveling, and service to others. James joined the Delta Kappa Epsilon (DKE) fraternity and the Syracuse University Ambulance Department and began a life of service to others. 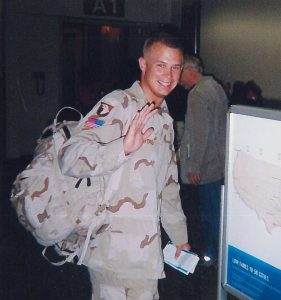 Military service in the Lyons family dates to James’ great+ grandfather, James J. Lyons who fought in the Civil War and other grandfathers, one of whom was a Captain of a minuteman company in the Revolutionary War and another who participated in time of the Boston Tea Party. While at Syracuse University, James participated in the Army ROTC program. When the September 11th, 2001, attacks occurred, James felt it was his turn to serve in the military. After graduating from Syracuse University in 2003 with an undergraduate degree in biochemistry, James enlisted in the United States Army and completed basic training at Fort Sill, Oklahoma. He then attended Army Officer Candidate School at Fort Benning, Georgia earning a commission as an Armor officer.

James was assigned to the 1st Battalion, 12th Infantry Regiment, 4th Brigade, 4th Infantry Division, at Fort Hood, Texas. He served as a tank platoon leader and deployed with his unit in support of Operation Iraqi Freedom. On September 27, 2006, First Lieutenant James N. Lyons was shot and killed in southern Baghdad, Iraq while his unit was attacking insurgents that had attacked a key strategic facility. At the time of his death, James was Syracuse University’s first known and youngest casualty of Operation Iraqi Freedom. His awards and decorations include the Bronze Star Medal, Purple Heart Medal, Meritorious Service Medal, Iraqi Campaign Medal, the Global War on Terror Medal, among others.

In his memory, James’ fiancée, Hillary Trent Genge ’02 G12 and DKE fraternity brother, Marc Klein ’03, created “The James Lyons ’03 Sons and Daughters Memorial Scholarship Fund” to benefit children of fallen or disabled U.S. Veterans at Syracuse University. Additionally, in 2008, the Syracuse University Ambulance Department created the “James Lyons Citizenship Award” presented annually to someone that exemplifies going above and beyond for others