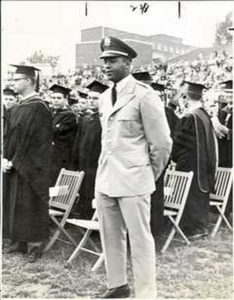 While Ernie Davis ’62 attended Syracuse University more than 60 years ago, he remains a campus legend who broke barriers as the first African American to win the Heisman Trophy. While he is known as a football star whose life was cut short by his battle with leukemia, many aren’t aware that Davis has a connection to the military as well. When he wasn’t busy playing football, he was a candidate in the University’s Army ROTC program and was commissioned as a second lieutenant following graduation. Due to his illness, he never got the chance to serve his nation outside of the ROTC program.

Davis began his journey to Syracuse University and the Orange football team when he began playing in high school at Elmira Free Academy in Elmira, New York. There, he was an immediate athletic standout, earning a total of 11 varsity letters in football, basketball, and baseball and was named All-Conference, All-State, All-Eastern and All-American. And while he was offered scholarships from several universities, he ultimately chose to attend Syracuse—thanks in part to another Syracuse football legend, running back Jim Brown.

“I wanted to play in the big time,” Davis said, “and a lot of people, including Jim Brown, persuaded me that I’d have better opportunities there.”