Janina Rios Brings Her Passion for Film to Campus 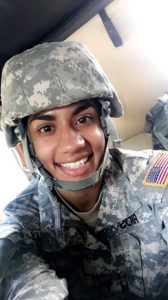 Growing up, Janina Rios didn’t think that going to college was a fit. “Coming out of high school, I wasn’t sure what I wanted to do. I knew higher education wasn’t for me,” she says.

That belief has certainly changed now that she is in her first semester at Syracuse University. After graduating from Suffolk County Community College earlier this year with an associate’s degree in radio and television production, she’s now pursuing a bachelor’s degree in film in the College of Visual and Performing Arts.

“Growing up, I wasn’t a fan of school. There was one option and that was the military,” she says. During her senior year of high school, Rios signed a contract to join the U.S. Army National Guard and attended basic training just three days after graduating. As one of nine siblings, she wanted to stay close to her large family, and the National Guard enabled her to do that.

“I was able to get stationed in Ronkonkoma,” she says. Ronkonkoma is a town on Long Island, New York, where Rios grew up and where her family still lives. “Being so young when I joined, I wanted to be close to the family. It was nice to have that support system.”

“I realized higher education would allow me to advance in life, ensuring I could provide for my family and myself,” she says. Now, Rios is at Syracuse chasing her dreams. In addition to her film major, Rios is considering minors in photography and psychology. “My ultimate goal is to start a film clinic for trauma victims,” she says, hoping that studying psychology will help her understand how her passion for film can help people heal. “I believe film can help victims of trauma express themselves.”