U.S. Deputy Secretary of Defense, Assistant Secretary of Defense for Manpower, Reserve Affairs, and Logistics, Deputy Director of the Office of Management and Budget,Chairman and CEO of Interactive Systems, Senior Vice President for National Security Research Programs for RAND, recipient ofthe Medal for Distinguished Public Service from the Department of Defense 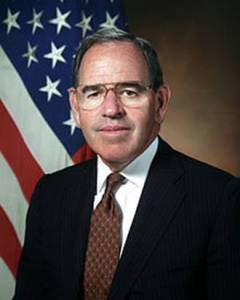 Born locally in Syracuse, NY in 1937, John Patrick White served as a U.S. Marine Corps officer for three years from 1959 until 1961. His service to country, however, has been lifelong.

White boasts an impressive academic record, having first earned a Bachelor of Science degree in industrial and labor relations from Cornell University in 1959. Following his military service, Lieutenant White returned to Syracuse University to earn master’s degrees in economics and public administration (1964), and then a Ph.D. in labor economics (1969) from the Maxwell School of Citizenship and Public Affairs.

Over his career, Dr. White has gained unrivaled academic, private sector, and government experience making him an exemplar among many successful Syracuse veteran alumni. His first foray into government executive leadership was as the Assistant Secretary of Defense for Manpower, Reserve Affairs, and Logistics from 1977 to 1978. Shortly thereafter, he transitioned to the Office of Management and Budget where he served as Deputy Director from 1978 to 1981. From there, Dr. White moved to the private sector, in which he served as the Chairman and CEO of Interactive Systems Corporation until 1988. Following an integration into Eastman Kodak Company that same year, John became General Manager of Integration Systems Product Division and the Vice President of Kodak until 1992. Further complementing his private sector experience, Dr. White spent nine years working with the RAND Corporation, providing expertise as the Senior Vice President for National Security Research Programs and a member of RAND’s Board of Trustees.

Most notably, in 1995, Dr. White returned to government at the request of the Clinton Administration and assumed the role of U.S. Deputy Secretary of Defense in which he served until 1997.

Today, Dr. White remains incredibly active in a number of roles. He is a Senior Partner at the defense investment firm Global Technology Partners, LLC, a Senior Fellow at the RAND Corporation, and a member of the Council on Foreign Relations. He is also the director of the Concord Coalition and the Center for Excellence in Government as well as a public policy lecturer and board member of the Belfer Center for Science and International Affairs at Harvard University’s Kennedy School of Government. Furthermore, Dr. White is a member of the Defense Advisory Committee on Military Compensation and the Policy and Global Affairs Oversight Committee for the National Research Council.

His accomplishments have not gone unnoticed. The Department of Defense has, not once, but twice awarded him with the Medal for Distinguished Public Service—truly an impressive recognition and one that demonstrates his irreproachable commitment to public service.

Dr. John White is an alumnus of Syracuse University and a veteran of the U.S. military. You should know his story.