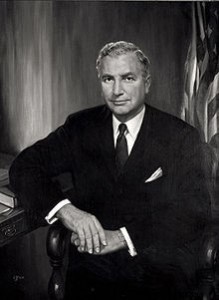 A native of Syracuse, New York, John (“Jack”) T. Connor was born on November 3, 1914 to Michael Joseph and Mary Vivian Connor. Connor began his educational pursuits at Syracuse University in 1933. While attending Syracuse, he joined the Phi Kappa Psi fraternity and was a student manager for the football team, for which he later earned a Letter Winner of Distinction award from the Varsity Club. Conner graduated in three years in 1936 with a Bachelor of Laws (LLB) degree and then went on to Harvard Law School.

After law school, Mr. Connor moved to New York City to work for the law firm of Cravath, de Gersdorff, Swaine, and Wood. Connor married the former Mary O’Boyle the following year and she would stick by his side for six decades. After three years working in a New York law firm, Mr. Connor became the general counsel and researcher for the Office of Scientific Research and Development, a federal agency that conducted scientific research for the military, including finding cures for infectious diseases. His research was focused on penicillin production and procurement.

By the height of World War II in 1944, Connor was given a commission in the United States Marine Corps as a Marine air combat intelligence officer, though he mainly worked as a Special Assistant to the Secretary of the Navy, James V. Forrestal. Two years after the war, Mr. Connor entered the pharmaceutical industry and began his decade-long climb within Merck & Company, starting out as a general attorney and moving up to President and Chief Executive.

Connor entered politics in 1964 as co-chairman of the Johnson-Humphrey presidential campaign and, within a year, President Lyndon B. Johnson selected him as the 16th Secretary of Commerce. In his tenure, Connor helped settle an East Coast dock strike and a General Electric employees’ strike. Mr. Connor resigned, however, just two years into his term due his disagreement the President over the Vietnam War and its effects on the U.S. economy.

Secretary Connor returned to pharmaceuticals and became the President, Chairman, and CEO of Allied Chemical Corporation, later named Allied Signal. By the 1970s, Mr. Connor also led the Committee of Business Executives against the Vietnam War for two years and served on the Rockefeller commission that investigated CIA intelligence collection activities within the United States. After stepping down from Allied Chemical in 1979, Mr. Connor spent the next eight years as nonexecutive chairman of the New York operation of Schroders, a London-based merchant banking firm.

During his extensive career in pharmaceuticals, law, and politics, John T. Connor was one of the few who could say he was the head of two Fortune 500 companies. Mr. Connor has since passed from Leukemia at age 85 and is survived by his two sons, John and Geoffrey, and daughter Lisa.

John T. Connor is an alumnus of Syracuse University and a veteran of the U.S. military. You should know his story.