Biden III, the eldest son of former Senator and Vice President Joe Biden, was born and raised in Wilmington, Delaware. Following his father’s footsteps, Beau attended his father’s high school alma mater, Archmere Academy, was a member of the same fraternity, Psi Upsilon, at the University of Pennsylvania, and continued to Syracuse University College of Law.

Biden began his career in public service shortly after graduation from law school. First, he served as a clerk for Judge Steven McAuliffe of the U.S. District Court in New Hampshire. A year later, he joined the U.S. Department of Justice Office of Policy Development as a counselor, where he worked on issues such as the Brady Handgun Violence Prevention Act and the Violence against Women Act. From 1997 until 2002, Beau served as a federal prosecutor in the U.S. Attorney’s Office in Philadelphia. He later turned to private practice as a partner in the Wilmington-based law firm of Bifferato, Gentilotti, Biden & Black. 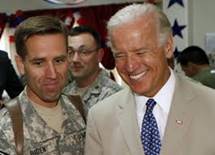 While working in the private sector, Biden joined the Delaware Army National Guard in 2003 as a member of the Judge Advocate General (JAG) Corps. Notably, he served as Interim Legal Advisor for the U.S. Department of Justice in post-war Kosovo, assisting in the development of a law enforcement and criminal justice system.

Elected in 2006 as Delaware’s Attorney General, Joseph Beau Biden III took office and served two consecutive terms. In his first term on October 2008, the 261st Signal Brigade was activated for a 12-month deployment supporting Operation Iraqi Freedom in Iraq, during which Beau delegated his Attorney General responsibilities to serve. In November 2011 Beau Biden was promoted to the rank of Major.

Protecting children was among Biden’s highest priorities as attorney general, evident through his creation of a Child Predator Task Force. Beau Biden assisted in making Delaware a national leader in the fight to protect children from predators by successfully pushing for tougher, mandatory prison sentences for child predators and distributors of child pornography. In addition, Beau created the Mortgage Fraud Task Force, designed to protect homeowners from consumer fraud and help stop the rising tide of foreclosures. The Task Force’s work with the Consumer Protection Unit resulted in what is believed to be the largest mortgage rescue fraud indictment in Delaware’s history.

Notably, in 2011, Beau was honored with the Voice of Courage Award from Darkness to Light (D2L), a national nonprofit organization working to empower and teach adults to prevent child sexual abuse; and in 2013, Beau was awarded the LifeLock Ultimate Award for his efforts to fight identity theft, improve online safety and educate children about cybersecurity. Described by many, Beau Biden was a careful, cautious, and deliberate politician, who shunned the limelight to focus on the issues at hand.

Beau Biden passed away May 30th, 2015 and is survived by his wife Hallie, and two children.

Joseph “Beau” Biden III is an alumnus of Syracuse University and a veteran of the U.S. military. You should know his story.