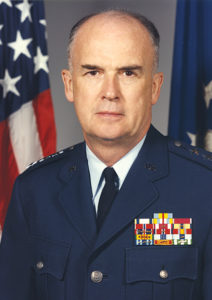 Lieutenant General Charles P. McCausland, USAF retired, is an alumnus of Syracuse University, and also a military veteran. You should know his story, because it’s a Syracuse University story – one that speaks to our past, our present, and our future.

General McCausland was born in 1935, in Flushing, N.Y., and graduated from Great Neck (N.Y.) High School in 1953. He then enrolled as a student in the College of Arts and Sciences at Syracuse University, and graduated in 1957. Upon graduation and completion of ROTC training at SU, he was commissioned as a 2nd Lieutenant in the United States Air Force.

General McCausland served a long and distinguished career in the Air Force (1957 to 1992).  His career culminated with his selection to command Defense Logistics Agency (DLA), and as DLA Director responsible for inventory management of more than four million spare parts, industrial commodities, fuels and petroleum products, consumable items such as medical supplies, clothing, and subsistence, cataloging, property and hazardous material disposal, storage and distribution, and the contract administration of all military procurements. Staffing of the agency exceeded sixty thousand personnel, with an operating budget in excess of three billion dollars.

During his tenure, supply chain management was introduced and adopted at the Department of Defense. Prior to being assigned to the Defense Logistics Agency, McCausland held a variety of positions in the Air Force Logistics Command. He served as the vice-commander, chief of staff, and deputy chief of staff for plans and programs for logistics operations, and for maintenance. He also served as the commander of the Ogden Air Logistics Center in Utah. Prior to that McCausland served as the commander of the Defense Contract Administration Region, Los Angeles, and of the DOD Cataloging Activity in Battle Creek.

Since retirement he has been active with industry, government and education, serving as a director and a member of the Audit Committee of the Dynamics Research Corporation, past president of the Ontario County Association for Retarded Children, a trustee of the Finger Lakes Community College, and a member of the advisory Board of the H.H. Franklin Center for Supply Chain Management at Syracuse University.

General McCausland is an alumnus of Syracuse University, and a veteran of the U.S. military. You should know his story.