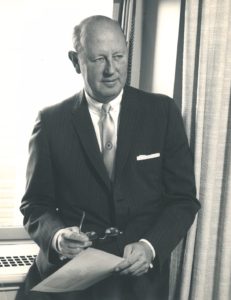 Born into the Great Depression in 1929, Louis F. Bantle witnessed first-hand the strengths and weaknesses of U.S. economy as well as its global reach. Influenced by his early childhood and by his father, Louis A. Bantle, Mr. Bantle attended the Whitman School of Management at Syracuse University in 1951, graduating with a degree in business administration. After graduation, he served in the U.S. Marine Corps during the Korean War and was quickly promoted to the rank of Captain.

Following his service in the Korean War, Mr. Bantle began his business career in Greenwich, Connecticut as an advertising manager for U.S. Tobacco (UST), which is known for its smokeless tobacco brands Skoal and Copenhagen. By 1967, Bantle was elected vice president of marketing and a member of the board of directors. Six years later, he rose to chairman of the board and president and, later, CEO, until his retirement in 1993. Under Mr. Bantle’s leadership as CEO, the United States Tobacco Company became a Fortune 500 Corporation, growing ten-fold in revenue. During his tenure, UST is also accredited with acquiring Chateau Ste. Michelle, Washington State’s largest winery, and with initiating a partnership with NASCAR through sponsoring the “Skoal Bandit” Grand National race car.

Notably, Mr. Bantle was also a philanthropist and humanitarian who drove social change on both international and American soil. In 1996, he founded and funded the International Institute for Alcohol Education and Training (IIAET) and its Center for Healing—the House of Hope—in St. Petersburg, which introduced Alcoholics Anonymous to Russia. Bantle and his wife, Virginia, were pioneers in helping establish both The Miami Project to Cure Paralysis and The Buoniconti Fund in the quest to find a cure for paralysis and treat spinal cord injuries. Mr. Bantle also helped to develop one of the nation’s most successful and replicated Explorer Programs: the Explorer Post 53 Ambulance Corps.

Even as Mr. Bantle was highly active in both corporate and philanthropic life, he was also contributing to Syracuse University’s growth as an alumni. In 1979, he received the George Arents Pioneer Medal Award, our university’s highest distinction for alumni who demonstrate excellence in their chosen career fields. A year later, he joined the university’s board of trustees, serving until 1997. Still, Mr. Bantle’s accolades continued. A former member of our varsity golf team, Mr. Bantle was named a Letter Winner of Distinction in 1986. Then, in 1991, he received the Chancellor’s Medal. In 1994, he was named the Whitman School of Management Alumnus of the Year and was awarded an Honorary Doctor of Humane Letters. Mr. Bantle’s legacy at Syracuse University lives on through two endowed faculty Chairs and several scholarships.

Mr. Bantle’s accomplishments were also recognized nationally and globally. In 1990, he received the prestigious “Semper Fi” award from the Marine Corps Scholarship Foundation. The following year, President George H.W. Bush appointed Mr. Bantle to the advisory committee on the arts for the John F. Kennedy Center for the Performing Arts. Mr. Bantle was also a Knight of the Royal Order of the North Star, an exclusive investiture of the government of Sweden, rarely granted outside that country. Louis F. Bantle peacefully passed away in October 10, 2010, but will forever be known as a prominent American business leader of the 20th century.

Louis F. Bantle is an alumnus of Syracuse University and a veteran of the U.S. military. You should know his story.