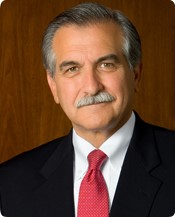 Louis J. Giuliano is a man of principle and an American businessman who graduated from Syracuse University with a Bachelor of Arts in Chemistry (’68) and Master of Business Administration in Marketing (’69) from the Whitman School of Management. Giuliano is also a U.S. Army veteran who made the rank of First Lieutenant and served honorably in Vietnam.

In the business world, Mr. Giuliano began working with the Aerospace group at Allied Signal. He served at Allied for nearly 20 years and rose to President of the Avionics Systems Group, responsible for seven operating units nationwide. In 1988, Mr. Giuliano joined ITT as Vice President of Defense Operations and, in 1991, became President of ITT Defense and Electronics, a position he filled for another eight years. As President and CEO of the ITT Defense and Electronics department, Mr. Giuliano received an important contract in 1997 with the U.S. Army’s Communications and Electronics Command. This partnership would transform tactical communications with the development and implementation of a new U.S. Army combat radio, the SINCGARS. Then, from 2001 to 2004, he led ITT Industries as Chairman, President, and Chief Executive Officer. During his tenure, his chief priority was to improve operating performance and he oversaw significant increases in ITT’s market capitalization (250%) and stock price (170%).

In November 2004, former President George W. Bush appointed Mr. Giuliano to governor of the U.S. Postal Service. The Senate confirmed him in 2005 to serve a full nine-year term.

Mr. Giuliano attributes his time in the service for his success in the corporate world. He stated in a USA Today article about fellow veteran corporate leaders, “there is debate over whether it was combat or military training that gave them a leadership edge. The military teaches the responsibility of serving, not just fulfilling your own needs.”

Currently, Mr. Giuliano serves as Non-Executive Chairman of Vectrus, a leading provider of global service solutions in areas of Infrastructure Asset Management, IT, and Network Communication services, and Logistics and Supply Chain Management Services. He is also Senior Advisor to The Carlyle Group and is the Operating Executive to the Aerospace & Defense, Automotive, and Transportation and Industrial Groups. He is actively involved with the CEO Forum and the Advisory Board for the Princeton University Faith and Work Initiative. In addition, he is the Founder of Workforce Ministries, Honorary Chairman of the Westchester County Red Cross Armed Force Emergency Services, and he holds several other board positions for organizations including Accudyne Industries and Meadowkirk Retreat Center.

Notably, Mr. Giuliano is also a sponsor of Syracuse University’s Entrepreneurship Bootcamp for Veterans with Disabilities (EBV) based out of the Whitman School of Management and Institute for Veterans and Military Families. Mr. Giuliano is married to his wife Barbara and they have two daughters and six grandchildren.

Louis J. Giuliano is an alumnus of Syracuse University and a veteran of the U.S. military. You should know his story