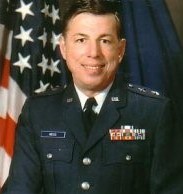 Growing up in Brooklyn, NY, Weiss was a hometown hero, dedicated from an early age to serving his country in uniform. He attended New York University, where he was a cadet in the Reserve Officer Training Corps (ROTC) and graduated with a Bachelor’s of Science in Government and education, cum laude, in 1955. Soon after graduating from NYU, Weiss entered the US Air Force as a commissioned officer in 1956, first serving at the New York Air Procurement District in New York City as an administrative contracting officer. Weiss continued to work in Air Force procurement, being transferred in 1958 to the 20th Tactical Fighter Wing based at Royal Air Force Station in Wethersfield, England, where he served as a base procurement officer. Weiss served in England for two years before returning to the United States, where he was Chief of the Systems Management Division at the Air Defense Command Headquarters in Colorado. While at the Systems Management Division, Weiss was responsible for the procurement and administration of operations contacts supporting the Distant Early Warning line, the Ballistic Missile Early Warning System, and the Spacetrack stations, working closely with Dutch and Canadian officials in these areas.

Weiss’ time in Colorado allowed him to develop his managerial and leadership skills, which would become important for his time at Syracuse University. While at SU, Weiss received a Master’s in Business Administration with honors in 1966 from the SU School of Management through the Air Force Institute of Technology. Having traveled to the East Coast to attend SU, Weiss was transferred back to the West Coast, where he served at the Defense Contract Administration Services Division in Los Angeles, California as a manufacturing officer and plant office chief at Garrett Air Research Corporation. He would later serve as Chief of the Contract Administration Directorate for the region before returning to the East Coast to serve in the Office of the Deputy Chief of Staff for Systems and Logistics at the Pentagon. While in Washington DC, he became a procurement staff officer and was responsible for contract policy formulation and implementation for major weapons systems such as the A-10 and F-15. His successes in the office at the Pentagon were incredibly valuable for the Air Force, who decided to transfer him back “into the field” and send him to many Air Force Bases around the country, including Andrews Air Force Base in Maryland and Wright-Patterson Air Force Base in Ohio. While at Andrews and Wright-Patterson, Weiss was in charge of major systems procurement and acquisition programs.

Weiss’ track record of success in systems acquisition for the Air Force definitely helped Weiss move up the chain of command to his second-to-last post at the Office of the Deputy Chief of Staff for Research, Development, and Acquisition. While here, he served as the Director of contracting and manufacturing policy from 1983-1985, where he was responsible for developing contract and manufacturing policy related to all major military systems acquisition. Weiss’ last post was at the Air Force Systems Command at Kirtland Air Force Base in New Mexico, where he served as Commander of the Air Force Contract Management Division. He was responsible in this post for the administration of major weapons systems acquisition contracts within the United States. He remained in New Mexico from 1985 until his retirement from the Air Force in 1988.

Weiss has received many commendations from the Air Force, from the Distinguished Service Medal and the Legion of Merit with two oak clusters to the Air Force Commendation Medal with two oak leaf clusters and the Meritorious Service Award. He is also a Fellow of the National Contract Manager Association, where he served on the Board of Directors.

Major General Bernard L. Weiss is an alumnus of Syracuse University, and a veteran of the U.S. military. You should know his story.