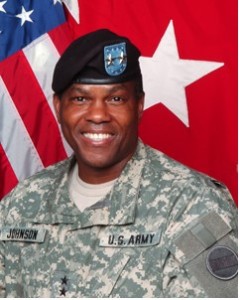 Born in rural Georgia in 1951, Johnson attended Fort Valley State University south of Macon, where he graduated with a Bachelor’s of Arts in Business Administration in 1973, received a commission in the United States Army as a second lieutenant, and met his future wife, Doris. While at Fort Valley State, Johnson was a member of the Phi Beta Kappa fraternity, and graduated cum laude and as salutatorian of his class.  From 1973 to 1993, he held a number of different positions, each with different responsibilities. For example, his wide range of experiences stretched from his service as an action officer at the Total Army Personnel Center, a financial management officer at the 21st Support Command, and as a program analyst for the US Army Deputy Chief of Staff for Logistics.

In 1982, Johnson graduated from Syracuse University’s School of Management with a Master’s in Business Administration, following the historic trend of veterans attending SU for Master’s Degrees. While here at SU, Johnson graduated cum laude and as salutatorian of his class. After his time at SU and a one-year fellowship to the US Army Command and General Staff College, Johnson began to work in strategic issues, such as his position as the Chief of Staff and Support Operations Officer for the 3rd Corps Support Command at Fort Knox, Kentucky. Johnson would later serve in leadership positions with the 227th Maintenance Battalion, Eighth US Army in South Korea, the 29th Support Group of the 21st Theatre Army Area Command in Germany (and also served in Bosnia), and at the Army War Reserve Support Command in Rock Island, Illinois.

In 1999, Johnson became a transformative player in the reform of the Army War Reserve Support Command (AWRSPTCMD). Chosen as its Commanding General, Johnson helped transition AWRSPTCMD into the Field Support Command (FSC), which became the “one-stop-shop” for all US Army Materiel customers and consumers. His success at FSC led the Army to appoint him as the Director of Plans, Readiness, and Operations for the US Army Deputy Chief of Staff for Logistics at the Pentagon, in which he managed the logistics aspect of the response to the September 11, 2001 attacks as well as the early stages of US combat missions in Iraq and Afghanistan. After a similar three year position at the US Army Field Support Command, Johnson was appointed in 2007 as the Deputy Chief of Staff for Logistics (G-4) at the Army Forces Command (FORSCOM) at Fort McPherson in Georgia. While at FORSCOM, Johnson was responsible for all logistical support for the more than 800,000 active and reserve Army personnel as well as 40,000 Department of the Army civilian personnel.

Following Johnson’s retirement in 2009, he and his wife Doris are retired in the Washington DC area, where he is the Vice President for Operations and Logistics at Honeywell Technical Solutions.

Jerome Johnson is an alumnus of Syracuse University and a veteran of the U.S. military. You should know his story.