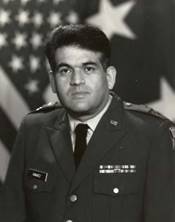 Max Baratz was born on 1934 and raised in Aurora, Illinois. His childhood hobby was stamp collecting. His father enlisted in the Army during World War I and served as a noncommissioned officer in the Signal Corps, and his mother was a recent immigrant, coming to the United States from Poland as a young child.

In August 1956, Max Baratz graduated Infantry Officer Basic and received his first assignment as the Pioneer/Ammunition Platoon leader of 16th Infantry, 1st Infantry Division and later transferred to 3d Battalion, 18th Infantry. Six months later, he joined the Army Reserves where he continued his platoon leader, command and staff time. He graduated from the Engineer Officer Advance Course and was promoted to Command and General Staff College with the 3rd Battalion, 18th Infantry at Fort Riley. In 1976, as a Colonel, Baratz was selected to be the 416th Engineer Command’s Chief of Staff and; in 1979, Baratz was selected as a Brigadier General in the Army Reserve. In 1983, after 11 years of service in the 416th Engineer Command, the Army selected him as commander, then nominated for Major General by President Reagan.

Prior to returning to active duty, Baratz was a retail stockbroker for H. Hentz & Company, functioning as a block trader representing 20 major brokerage houses. After experiencing much success at H. Hentz, he became a member of the largest floor exchange-the Midwest Stock Exchange. Starting as a broker, Max Baratz quickly climbed the ranks to serve as the Executive Vice-President of Billings, Inc.

It wasn’t until 1991, during Operation Desert Shield and Desert Storm, that Major General Baratz was called to active duty to serve as the Deputy Commanding General for Reserve Affairs, overseeing one of the largest mobilizations since WWII to support the Gulf war. Shortly after, Major General Baratz was again called to active duty to be Deputy Commanding General of the United States Army Reserve Command, responsible for the training and readiness of almost all Army Reserve units in U.S. Three years later, he was selected to be the Chief of the Army Reserve in 1994. Under his direction, Army Reserve units were the first into and the last out of Haiti, in support of Operation Restore Democracy, with more Army Reservists mobilized in support of peace keeping efforts in Bosnia than were mobilized during the Vietnam conflict.

Max Baratz is an alumnus of Syracuse University and a veteran of the U.S. military. You should know his story.