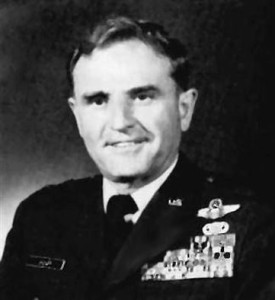 Sadler was born in the small city of Canton, Ohio in 1925 and grew up in Montgomery, Alabama, where he graduated from high school in 1943. Upon graduation from high school, he enlisted in the Army Air Corps in August 1943 and was assigned to the European theatre of operations during World War II as a B-17 nose gunner. Sadler flew 35 combat missions with the 8th Air Force’s 92nd Bombardment Group. After being discharged when the war ended in 1945, Sadler studied at the University of Alabama before returning to the service in 1948. Sadler quickly graduated from advanced flying school and was commissioned as a second lieutenant in 1949 before he was deployed to South Korea. Sadler flew over 300 missions during the Korean War from 1950-1951. Upon returning from South Korea, he was stationed with the 50th Troop Carrier Squadron at Stewart Air Force Base in Tennessee. Always excited for adventure, Sadler was transferred to Evreux Air Base in France in 1955, where he served as a commander and pilot with the 317th Tactical Command Post for four years.

Sadler gained valuable leadership experience while in France that he brought back with him to the United States as a C-130 flight commander with the 774th Troop Carrier Squadron at Stewart Air Force Base from 1959-1961. During this time, his teaching abilities were also recognized by the Air Force, who transferred Sadler to the Tactical Air Command Joint Air Ground Operations School at Keesler Air Force Base in Mississippi in 1961. Sadler only spent one year at Keesler before being transferred to Homestead Air Force Base in Florida during the Cuban Missile Crisis of 1962. After a brief stay at Homestead, Sadler began a three year post at the Tactical Air Command Headquarters at Langley Air Force Base in Virginia, where he served as an operations officer. Soon after his service in Virginia, Sadler attended Syracuse University, where he completed his Bachelors of Science degree under the Bootstrap program, which helped veterans and service personnel finish or complete a college degree. He graduated from SU in 1965, and deployed to South Vietnam the very next year, where he served with the 1st Cavalry Division, the 834th Air Division, and the 7th Air Force.

In 1967, Sadler was promoted to Air Force Headquarters in the Pentagon, Washington, DC, where he served as chief of the Special Air Force Branch, Tactical Support and Airlift Forces Division, Office of the Deputy Chief of Staff for Plans and Operations. He later attended the National War College from 1969-1970. During this time Sadler earned two Masters’ degrees, one from the National War College and one from George Washington University. Sadler returned to commanding Airlift divisions for five years in Germany and South Carolina before being appointed to his last position as chief of security police at Air Force Headquarters. He retained this position from 1977 until his retirement in 1983.

Major General Thomas M. Sadler is an alumnus of Syracuse University, and a veteran of the U.S. military. You should know his story.