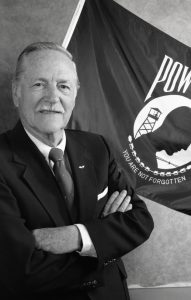 Newton “Newt” Foust Heisley was born in 1920. Originally from Williamsport, Pennsylvania, he attended Syracuse University and graduated in 1942 with a fine arts degree from the College of Visual and Performing Arts. Heisley was hired to be a graphic designer at the Pittsburgh Post Gazette.  However, after the attack on Pearl Harbor, Heisley commissioned as a second lieutenant in the U.S. Army and attended flight training in Texas at Ellington Field. He was deployed to New Guinea in March of 1945 and flew the Curtiss C-46 Commando, the world’s largest twin engine transport plane in the world at that time. He later deployed to the Philippine Island Leyte. Heisley flew transport missions during the battle of Okinawa and was later stationed in Japan after the end of WWII. He returned to the United States and began working at the Hayden Advertising Agency in New Jersey. One of Hayden’s clients was Annin Flag Company, the world’s largest flag manufacturer at that time. In 1971, the National League of Families of American Prisoners and Missing in Southeast Asia was looking for a flag design to promote their organization. Heisely was given the task to create a flag for their organization.

While flying missions over the Pacific, Heisley had thought about the possibility of being captured. He reflected on that experience and wrote down the phrase “You are not forgotten.” Heisley used his son Jeffrey as a model for the flag’s image, who was recovering from a case of hepatitis he caught while training for a tour in Vietnam as a US Marine. Heisley’s image of a black and white prisoner’s silhouette has since been adopted as a symbol for America’s missing service members. In 1988 the flag was flown over the White House, and since 1989 is the only flag permanently displayed at the U.S. Capitol. In 1990, the POW/MIA flag was ordered by law to be displayed in national cemeteries, military bases, veteran memorials the US Post Office on Armed Forces Day, Memorial Day, Flag Day, Independence Day, Veterans Day and National POW/MIA Day.

Heisley looked at his military service as one of his proudest achievements. He said in the 2002 book Faith Under Fire, “It reinforced my thoughts that I could do things I didn’t know I could do,” Heisley said. Heisley died on May 14, 2009 at age 88.

Newton “Newt” Foust Heisley is an alumnus of Syracuse University and a veteran of the U.S. military. You should know his story and all the other stories.