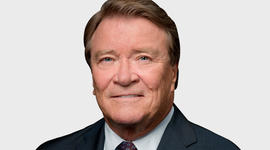 Born in Kokomo, Indiana in 1945, Steve Kroft was destined to become a journalist. He attended Syracuse University’s S.I. Newhouse School of Communication, where he received a Bachelor of Science in 1967 and was a member of the Kappa Sigma Fraternity. Like many other young college graduates during the Vietnam War, Kroft was drafted into the U.S. Army and assigned to the 25th Infantry Division in Cu Chi, a district of Ho Chi Mihn City (formerly Saigon). Once in Vietnam, Kroft’s journalistic abilities were soon recognized by the Army and he became a reporter for the Armed Services Network, reporting on American progress in Vietnam, in addition to covering the 25th Infantry Division’s invasion of Cambodia. Kroft’s journalistic abilities led him much success in the Army, winning multiple Army journalism awards and a Bronze Star for meritorious achievement in a combat zone.

After his honorable discharge from the Army in 1971, Kroft returned to Syracuse, working as a broadcast journalist for WSYR-TV for three years. He later left Syracuse and studied at Columbia University’s graduate school of journalism, earning his master’s degree in 1975. Kroft then went to Florida, working for the Washington Post in Jacksonville and WPLG-TV in Miami, where his work was noticed by CBS News. While in Miami, Kroft was offered, and later accepted, a correspondent position in CBS News’ Northeast Bureau in 1980. He later joined the Dallas bureau for two years before returning to Miami to cover Latin and South America, during which he famously covered the US invasion of Grenada and the civil war in El Salvador.

CBS News transferred Kroft to their London office, having recognized his knack for telling the most pressing stories of the time. There, he produced one of his most famous segments for 60 Minutes on the assassination of Indira Gandhi, for which he received his first Emmy Award. He later served as the principal correspondent for a CBS News magazine show, West 57th, until 1989, when he joined the award-winning 60 Minutes as a correspondent. Throughout his tenure on Sixty Minutes, Kroft has received significant critical praise, winning 11 Emmy Awards, five Peabody Awards, and two Columbia University DuPont Awards. His success has taken him from the contaminated fields of Chernobyl, Ukraine to Iraq during the Gulf War, to the violence in Northern Ireland, to the White House with his famous exclusive interview with Bill and Hillary Clinton in 1992, which many say was one of the defining moments of the 1992 presidential election.

Steve Kroft is an alumnus of Syracuse University and a veteran of the U.S. military. You should know his story.