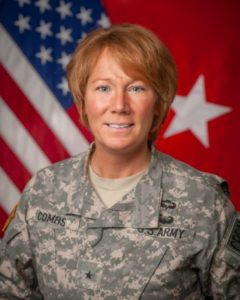 Peggy (Huther) Combs was raised the eldest of four children in the tiny upstate village of Oriskany, New York. Growing up with limited means, college was not her primary ambition until a high school athletic coach, also an Army Reservist, presented the possibility. After graduating from Oriskany High School in 1981, Combs would be the first in her family to attend college, supported by a four-year ROTC scholarship at Syracuse University.

Although adjusting to life as a Syracuse Army ROTC cadet was admittedly rough at first without a strong military family tradition, Peggy adapted well. By May of 1985, she was a distinguished military graduate with a bachelor’s degree in biochemistry and molecular biology and a commission in the U.S. Army as a second lieutenant.

Lieutenant Combs’ initially thought she would only serve out her initial four-year service obligation. It didn’t take long, however, for her to make a personal pact that as long as she found enjoyment and passion in her service, she would continue. That pact led to a successful 29-year (and counting) military career that includes pinning soon-to-be two stars as a general officer.

Over her career, Brigadier General (Promotable) Combs served in numerous leadership and staff positions at all levels of the U.S. Army, from tactical to strategic. Combs is also a veteran of Operations Enduring and Iraqi Freedom having served as the Joint Nuclear, Biological, and Chemical Operations Officer for U.S. Central Command (CENTCOM) and as the Chief of Staff for the Iraq Training and Advisory Mission. She continued her education in this time too, earning advanced degrees from the University of Saint Mary in business administration and the U.S. Army War College in strategic arts.

On September 11, 2012, Peggy Combs was honored with her first star and promotion to brigadier general at Fort Leonard Wood, where she assumed the dual role as 27th chief of the U.S. Army’s chemical branch and commandant of the U.S. Army Chemical, Biological, Radiological, and Nuclear School. But the Army had even more plans in store for her. Given her demonstrated senior leadership, in March of 2014, the U.S. Army selected Brigadier General Combs for command of Fort Knox, Kentucky and the U.S. Army Cadet Command—the first female ever to do so. She marked yet another major career milestone later this summer as she was selected for promotion to the rank of Major General.

Remarkably, Combs is the first female general officer from upstate New York and the first general with ties to Oriskany since Brigadier General Nicholas Herkimer of the Revolutionary War. But beyond her distinguished career and example set for aspiring women leaders, Combs is also a devoted military spouse and mother. Together, she and her husband and Army Colonel, Brad, have successfully raised three children through their shared journey as Army officers during a time of war. Still, BG(P) Combs’ passion for service rings clear as she once stated, “For me, soldiering is truly an affair of the heart. It really is about a love of service, a love of our country and the respect and love for our brothers-and-sisters-in-arms that serve with the same heart of service and commitment.”

Retired U.S. Army Major General Peggy Combs is an alumnus of Syracuse University and a veteran of the U.S. military. You should know her story.