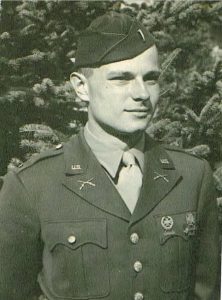 The College of Law held its Alumni Weekend event titled “Serving Veterans at the College of Law and in the Community” on Sept. 25, at the Grand Hall, National Veterans Resource Center. The oldest living College of Law alumnus and veteran, Robert Gang, was recognized with a certificate by Elizabeth G. Kubala, executive director of the Betty and Michael D. Wohl Veterans Legal Clinic, in front of current faculty, alumni, students and honored guests.

Gang grew up in the Syracuse area and attended Christian Brothers Academy for high school. His father gave Gang limited choices for his next steps after high school, “My father gave me an option. It was Syracuse University or no college,” says Gang.

Before finishing his law degree in 1942, Gang took an Army physical in December. He was told he needed to report to the 630th Tank Destroyer battalion at Fort Jackson in South Carolina the following month. He was five credit hours from a degree in law. He would complete his degree by passing his finals while on duty, and passed the New York State Bar exam on May 22, 1946.