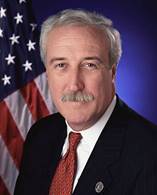 Sean O’Keefe was born to Patricia Carlin and Patrick Gordon O’Keefe in Monterey, California. As the son of a naval engineer, O’Keefe moved around often as a child. Following his high school graduation in Connecticut in 1973, O’Keefe attended Loyola University in New Orleans. He graduated four years later with a Bachelor of Arts in 1977. But rather than taking a little personal time before jumping into his career, O’Keefe immediately proceeded to Syracuse University’s Maxwell School of Citizenship and Public Affairs to continue his studies in its intensive, yearlong Master of Public Administration program.

Mr. O’Keefe entered public service as a budget analyst for the Department of Defense (DoD) shortly after earning his M.P.A. in 1978. He later joined the Senate staff, working on the Senate Committee on Appropriations for eight years before taking over as staff director of the Defense Appropriations Subcommittee. O’Keefe eventually moved back to DoD as its Comptroller and CFO in 1989. Notably, from 1992 to 1993, O’Keefe served as the acting Secretary of the Navy under President George H.W. Bush. Later during President George W. Bush’s first term, Sean served as deputy director of the Office of Management and Budget for a year and then as the NASA Administrator from 2001-2004.

Between these impressive government postings, O’Keefe held a number of significant positions in higher education and the private sector. Following his term as acting Secretary of the Navy in the mid-1990s, O’Keefe joined the business school faculty at Pennsylvania State University. He then rejoined the Maxwell School of Syracuse University as the Bantle Professor of Business and Government Policy where he taught for six years and directed the Maxwell School’s National Security Studies Program.

Following his terms at OMB and NASA, O’Keefe served for three years as Chancellor of Louisiana State University from 2005 to 2008. He then served as a vice president with General Electric for a year before taking over as Chairman and CEO of EADS North America (now Airbus North America) in 2009, a role he served in through 2014. Luckily, Mr. O’Keefe has returned to Syracuse University—yet again—as its 17th University Professor and the Phanstiel Chair of Strategic Management and Leadership. He concurrently serves as a Distinguished Senior Advisor with the Center for Strategic and International Studies (CSIS) in Washington, D.C.

Sean O’Keefe is an alumnus of Syracuse University and also the former acting Secretary of the Navy. You should know his story.