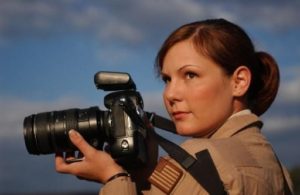 Stacy was born into a long line of military men and women, and for that reason it was no surprise that when she turned 17, she joined the United States Air Force, signing on as a combat photographer.

In 2003, Stacy was sent to her first combat mission in Iraq. In the years that followed, she traveled to the Horn of Africa, Lebanon, and was deployed back to Iraq two additional times.  On her second deployment to Iraq, she was injured by an IED blast – and she was injured again during her third deployment. For her actions in Iraq, Pearsall received an Air Force Commendation with Valor and Bronze Star.

Now combat disabled and retired from military service, Pearsall continues to work worldwide as a freelance photographer, and is an author, educator, military consultant, public speaker and founder of the Veterans Portrait Project.

Stacy began the Veterans Portrait Project in Charleston, SC, while recovering from her combat injuries. While she sat for hours in waiting rooms, she couldn’t help but to notice the men and women around her. She reached out to hear the stories of veterans from every branch of service, generation and conflict and felt inspired to bring her camera and take their portraits, leading to the project that now fills the walls of a number of VA Hospitals across the United States.

Pearsall was one of only two women to win NPPA’s Military Photographer of the Year competition, and the only woman to have earned it twice. She’s been honored as the Air Force Veteran of the Year by the Air Force Band and PBS, presented the Trojan Labor American Hero Award, honored with the Daughters of the American Revolution Margaret Cochran Corbin Award, lauded by the White House as a Champion of Change, and holds an honorary doctoral degree from The Citadel. The release of her first photography book, Shooter: Combat from Behind the Camera, received worldwide praise as “A book of the highest levels in the annals of combat journalism.” And her second book, A Photojournalist’s Field Guide: In the Trenches with Combat Photographer Stacy Pearsall, is “a must have for every aspiring photographer out there, and even pros can pick up a few new tricks to help them become better photographers.”

Stacy L. Pearsall is an alumnus of Syracuse University, and a veteran of the U.S. military. You should know her story.