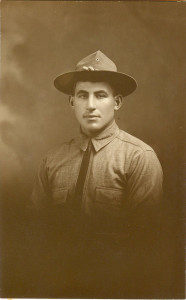 The late William Shemin, World War I veteran, is an alumnus of the New York State College of Forestry at Syracuse University. You should know his story because it’s a Syracuse University story—one that speaks to our past, our present, and our future.

On May 14, 2015, President Barack Obama announced that he would posthumously bestow the Medal of Honor, the U.S. military’s highest decoration for valor, to Sergeant William Shemin of Bayonne, New Jersey and Private William Henry Johnson of Harlem, New York for their heroic efforts on the Western front in World War I. President Obama will present the medal to Shemin’s daughter, Elsie Shemin-Roth, in Washington on June 2, 2015. Shemin-Roth, an SU alumna from the class of 1951, has been advocating for this recognition for the past decade.

Imagine the vast fields of northern France during the Great War—earthen trenches for miles, overwhelming German fire across the Vesle River, and your comrades falling victim to German bullets. Sergeant Shemin, a nineteen-year-old soldier from just outside New York City, was thrown into that very fearful situation. There he was, fighting with the Company G, 2nd Battalion, 47th Infantry Regiment, 4th Infantry Division of the American Expeditionary Forces. Engrained with a commitment to brotherhood, Shemin repeatedly exposed himself to heavy machine gun and rifle fire, crossing out of the trenches into no-man’s land to save his wounded comrades. After the officers and senior non-commissioned officers fell victim to this terror, Shemin took control of the platoon and displayed quick instinct and impressive initiative under fire, during which he was wounded by a machine gun bullet that pierced his helmet and was lodged behind his left ear. The Allied American-French forces fought valiantly and successfully pushed the Germans back across the Vesle and Aisne Rivers, eliminating the threat of the Germans taking Paris. Within the larger Allied victory of the Aisne-Marne campaign, Sergeant Shemin exemplified the highest degree of valor, bravery, and loyalty to his wounded and fallen comrades, which resulted in Shemin being awarded the Distinguished Service Cross, the nation’s second-highest decoration for combat valor.

After his honorable discharge in 1919, Shemin returned to Syracuse, having been previously stationed locally with the 47th Infantry Regiment. He enrolled in Syracuse University and graduated in 1924 with a Bachelor of Science degree in Forestry from the New York State College of Forestry at Syracuse University (now the State University of New York College of Environmental Science and Forestry). While at Syracuse, Shemin showed great promise in the classroom but also on the fields of friendlier strife, playing football and lacrosse. After graduating from Syracuse, Shemin launched a landscaping and gardening business in the Bronx, New York. He raised three children, Elsie Shemin-Roth ‘51, Emmanuel “Manny” Shemin ‘52, and Ina Shemin-Bass ’53 before passing away in the Bronx in 1973 at the age of 77.

Sergeant Shemin left a long legacy of service to our country and a legacy of Orange Pride at Syracuse University. All three of his children, Elsie, Emmanuel, and Ina, attended Syracuse. His daughter-in-law, Rhoda Lee Zisman Shemin, graduated in 1953, and met her future husband Emmanuel Shemin ‘52, a former University Trustee from 1997-2009, while at Syracuse. Four of Sergeant Shemin’s great-grandchildren have attended Syracuse; they are Rachel Forman ’05, William Cass ’08 (co-chair of the University’s Metro New York Leadership Council), Samuel Cass ’13 and Scott Bass ’15, in addition to one of his granddaughters Leslie Shemin-Lester ’84, who now serves on the Dean’s Advisory Council of the College of Visual and Performing Arts (VPA).

The Shemin family has been incredibly generous to the University over the past fifty years. A highlight is the Shemin Family Lecture Series in the College of Visual and Performing Arts’ fashion design program, which is designed to bring young alumni and other industry professionals to campus to meet students and help them understand the business of fashion. A collaborative effort between VPA and Syracuse University’s Martin J. Whitman School of Management, the Shemin Family Lecture Series focuses on fashion and business, and the promotion of interdisciplinary study. The Series was created with the generous support of the late Emmanuel “Manny” Shemin ‘52, his wife, Rhoda Zisman Shemin ‘53, and their daughter Leslie Shemin-Lester ’84.

Manny and Rhoda Shemin have been particularly engaged in the life of Syracuse University, the College of Visual and Performing Arts, and the Whitman School of Management. Their philanthropy has supported scholarships to students enrolled in the Whitman School and they helped fund the 300-seat Emmanuel and Rhoda Shemin Auditorium in the Shaffer Art Building in 1990. They also donated funds to build the Rhoda Shemin Student Lounge in the Winnick Hillel Center for Jewish Life, in addition to funding the creation of the Manny Shemin Resource Room in the Stevenson Education Center for the academic support of athletes at Manley Field House in 1995. Their service to the university is also evident in Emmanuel’s twelve-year tenure on the Syracuse University Board of Trustees, including nine years on its executive committee and service on the Board’s Academic Affairs and Facilities Committees. Manny was an integral contributor to campus beautification at SU; over the last ten years of his life, Manny annually selected from the Netherlands 1,000 daffodil and 200 tulip bulbs and donated them to Syracuse University.

Following service in the U.S. Air Force during the Korean War, Manny created Shemin Nurseries from his father’s retail nursery in the Bronx in 1955. The company pioneered the concept of the international nursery and garden supply distribution center and became the largest wholesale horticulture distribution business in the world, with centers throughout the United States, Canada, and Holland. Louis G Marcoccia, executive vice president and chief financial officer remarked, “Manny was a thoughtful person and successful businessman with an engaging personality. I always enjoyed our conversations about University matters.”

Marcoccia’s sentiments about the Shemin family are also shared by Thomas J Foley, the executive associate dean for Institutional Advancement at the Whitman School of Management. Foley remarks how Manny’s passion for landscaping and plants was also transferred to SU Athletics. For example, Manny donated dozens of trees that frame the athletic fields around Manley Field House. Foley highlights Manny’s connection with the university: “Manny was the salt of the earth; his father’s values were instilled in him and he passed those values on to future generations. The Shemin family (four generations of SU alumni) epitomize what you hope a Syracuse University family would be. They became part of the SU community and we became part of their philanthropic fabric.”

Before passing away in 2009, Manny also served on the Corporate Advisory Board of the Martin J. Whitman School of Management. Both he and Rhoda were integral supporters of the Entrepreneurship Bootcamp for Veterans with Disabilities (EBV), a national initiative run by the Institute for Veterans and Military Families at Syracuse University, designed to offer cutting-edge, experiential training in entrepreneurship and small business management to post-9/11 veterans with service-related disabilities.

There were many influential forces pushing to award the Medal of Honor to Sergeant Shemin, including pressure from veterans groups to Department of Defense investigators. Over the past several years, the Department of Defense has been investigating, back as far as WWI, instances of combat heroism that would warrant awarding of the nation’s highest military decoration for valor—the Medal of Honor—but where the Medal of Honor was not awarded given possible discrimination based on race or religion. One of the cases under investigation was that of our alumnus, William Shemin, who was Jewish. Due to bipartisan support, the U.S. Congress passed the William Shemin World War I Veterans Act, signed into law by President Obama, which allowed the Department of Defense to investigate any discrimination in the designation of awards to Jewish service members, which effectively allowed Shemin to receive the Medal of Honor. Elsie Shemin-Roth ‘51 spearheaded this campaign, joined by Representative Blaine Leutkemeyer (R-MO) and Senators Claire McCaskill (D-MO), Dean Heller (R-NV), Roy Blunt (R-MO), and John Boozman (R-AR). Upon receiving news that President Obama would bestow the medal, Senator McCaskill said in a statement, “Discrimination should never play a role when our country pays tribute to extraordinary acts of courage and selfless sacrifice. I couldn’t be prouder that we were able to correct these past injustices and that William Shemin and other Jewish heroes will get the recognition they deserve, and the national gratitude they earned.”

Sergeant William Shemin ’24 is an alumnus of the New York State College of Forestry at Syracuse University and the only graduate to receive the Medal of Honor. You should know his story