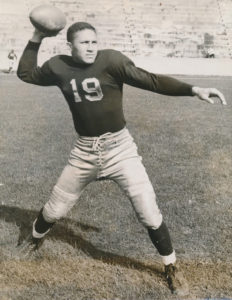 As an African American, Wilmeth Sidat-Singh grew up in a time where segregation was an everyday part of life. After the death of his father at a very young age, his mother re-married and moved to Harlem, New York. During high school, Wilmeth showed promise on the basketball court and was named an All-New York City basketball player in the Bronx. In 1935, Sidat-Singh was awarded a scholarship to attend Syracuse as member of the basketball team. While at Syracuse, his athleticism on the court left the Orange with a 40-13 record during his career on the team. Wilmeth dominated on the court and was even extended an offer to join the football team.

Syracuse University was one of the first schools to allow African-American players on their football team, demonstrating the progressive nature of the institution. During one game against the University of Maryland, however, Wilmeth’s identity as African-American was revealed and he was barred from playing. The Orange lost 13-0, but he returned the following year and led the Orange to beat Maryland 53-0.

After graduating from Syracuse, Wilmeth joined the police force in Washington, D.C. Once the United States entered World War II, Wilmeth chose to serve his country by joining the Tuskegee Airmen, the U.S.’s only African-American Unit in the Army Air Force. He earned his wings as a pilot shortly thereafter. Sadly, during a training mission in 1943, the engine on Wilmeth’s plane failed and his plane went down in Lake Huron.

To honor his legacy, Syracuse University retired Sidat-Singh’s basketball number. Today, his jersey hangs in the rafters of the Carrier Dome.

Wilmeth Sidat-Singh is an alumnus of Syracuse University and a veteran of the U.S. military. You should know his story.