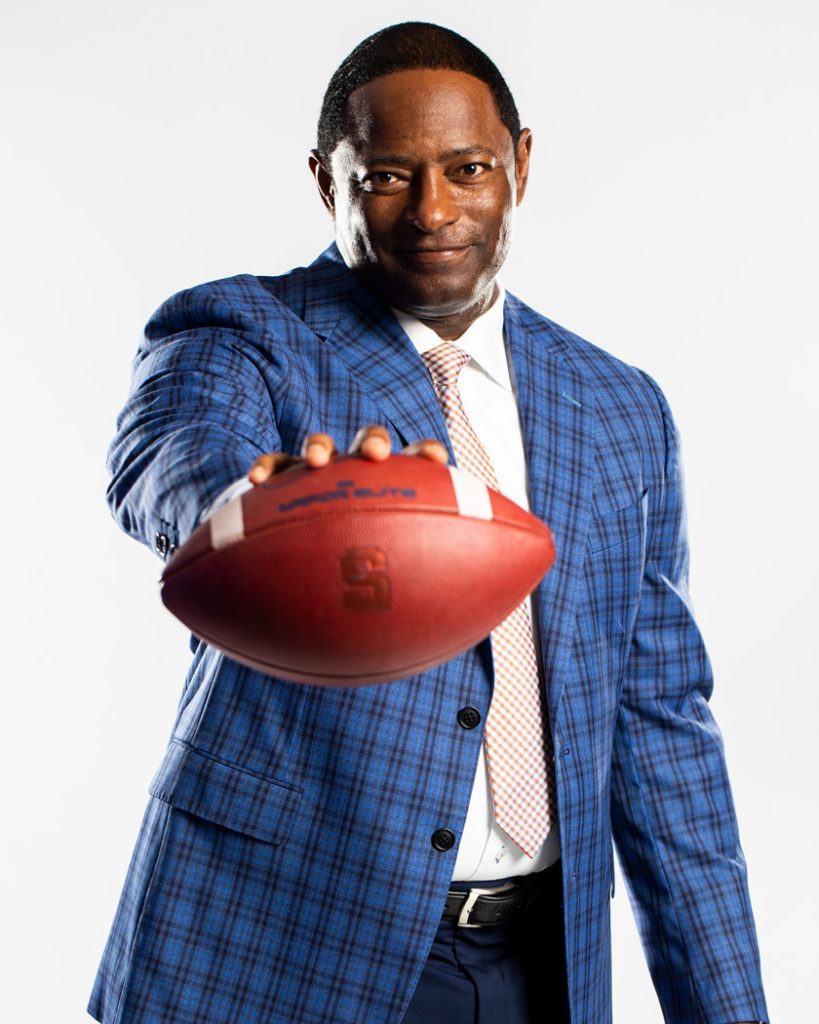 A proven winner and respected mentor, Dino Babers was named the 30th head football coach at Syracuse University on Dec. 5, 2015. A four-time conference champion (EIU and BG), Babers owns a 60-42 (.588) career record and boasts nearly 40 years of experience in the profession.

Known for his innovative, ultra-fast offense, Babers is in his fifth season on the Syracuse sideline. Since his arrival on campus, Babers has reshaped the culture of Orange football by fostering an atmosphere of fairness, family and accountability. An adherence to those core values has allowed Syracuse’s assistant coaches, staff and student-athletes to reach their full potential. On the field, the Babers era has featured record-setting production and a 10-win season in 2018.

In December 2018, Syracuse Director of Athletics John Wildhack ensured the growth of the Orange would continue under Babers by announcing a contract extension that keeps the veteran coach at the helm of the program well into the future.

Prior to coming to Syracuse University, Babers served as Head Coach at Bowling Green and Eastern Illinois. Before taking the helm at Eastern Illinois, Babers spent four seasons at Baylor in various capacities. Before that, he worked for four years at UCLA as assistant head coach, running backs coach and wide receivers coach.

A native of San Diego, California, Babers has also made assistant coaching stops at Pittsburgh, Texas A&M, Arizona, San Diego State, Purdue, Northern Arizona, UNLV and Eastern Illinois. He began his collegiate coaching career as a graduate assistant at Hawaii in 1984. Babers spent the next two seasons in a similar position at Arizona State before landing his first full-time job at Eastern Illinois in 1987.

Babers has coached or recruited more than 70 NFL players, including quarterback Jimmy Garoppolo, who won the Walter Payton Award (the FCS equivalent of the Heisman Trophy), as well as 33 draft picks, four All-Pros and three Pro Bowlers.

A 1984 graduate of the University of Hawaii with a bachelor’s degree in education, Babers started at three different positions (outside linebacker, strong safety, running back) for the Warriors during his career, while earning Western Athletic Conference All-Academic honors. As a senior, he served as Hawaii’s special teams captain and was the squad’s leading rusher.

Babers tried out for the BC Lions of the Canadian Football League before an injury in training camp ended his playing career.

Babers, who received his master’s degree in education administration and supervision from Arizona State in 1987, and his wife, Susan, have four daughters – Breeahnah, Tasha, Jazzmin and Paris.

Babers is the son of a U.S. Navy Veteran.

You Do Not Walk Alone
Syracuse University Singers
Elaine Hagenberg