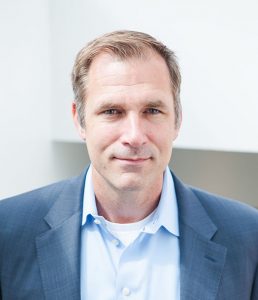 Mike Hayes is the Chief Digital Transformation Officer at VMware. He joined VMware in October 2020, and leads the company’s worldwide business operations and the acceleration of the company’s SaaS transition. Prior to joining VMware, Mike served as Senior Vice President and Head of Strategic Operations for Cognizant Technologies, where he ran a $2B P&L for Cognizant’s largest financial services clients. Mike previously spent four years at Bridgewater Associates, an investment management firm, where he served in Chief of Staff to CEO and COO roles. Prior to Bridgewater, he spent 20 years in the U.S. Navy SEALs where his career began as one of 19 graduates from a class of 120. Mike served throughout South America, Europe, the Middle East, and Central Asia, including the conflicts in Bosnia, Kosovo, Iraq, and Afghanistan. His last job in the Navy was the Commanding Officer of SEAL Team TWO, which included ten months as the Commander of a 2,000 person Special Operations Task Force in southeastern Afghanistan. Before that, Mike was selected as a White House Fellow (’08/’09) and served two years as Director, Defense Policy and Strategy at the National Security Council. In the Bush Administration, Mike was responsible for the START Treaty, where he produced a new proposed START Treaty and flew to Russia for negotiations. In the Obama administration, he led the White House response to President Obama’s first major foreign policy showdown – the hijacking of the Maersk Alabama off the coast of Somalia. Prior to the White House Fellowship, Mike served as the Deputy Commander for all Special Operations in Anbar Province, Iraq. Mike holds an M.A. in Public Policy from Harvard’s Kennedy School and received his B.A. from Holy Cross College, where he was an active Big Brother. His military decorations include the Bronze star for valor in combat in Iraq, a Bronze Star for Afghanistan, and the Defense Superior Service Medal from the White House. Mike is on the boards of Immuta, a data governance company, and the National Medal of Honor Museum. Mike is a lifetime member of the Council on Foreign Relations, is fluent in German and Spanish, frequently speaks in public about leadership and elite organizations, and enjoys mentoring others to success. He is a life-long Sox/Pats fan, but most enjoys laughing with his wife, Anita, and their 20-year old daughter, Maeson. 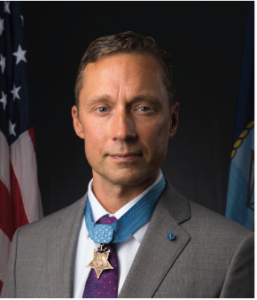 Britt Slabinski is from Northampton, MA. He earned the rank of Eagle Scout at age 14 and upon graduating High School enlisted in the US Navy in 1988. He completed Basic Underwater Demolition SEAL training with class 164 in January 1990. Slabinski retired from Naval Service after 25 Years as a Command Master Chief. During those years he completed 9 overseas deployments and 15 combat deployments in support of U. S. national objectives.

Slabinski was awarded the Medal of Honor from President Donald J. Trump on May 24, 2018 for his actions during combat operations on March 4, 2002 while deployed to Afghanistan.