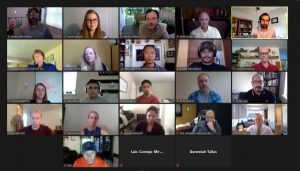 Last week, for the sixth year in a row, Syracuse University hosted the esteemed Warrior-Scholar Project (WSP), a no-cost academic boot camp for first-year student veterans. Normally held on campus to allow for a comprehensive campus experience, the program was moved online this year in light of the COVID-19 pandemic. END_OF_DOCUMENT_TOKEN_TO_BE_REPLACED

END_OF_DOCUMENT_TOKEN_TO_BE_REPLACED

Today, June 12, 2o2o, ​the Pat Tillman Foundation (PTF) announced the names of the 60 U.S. service members, veterans and military spouses chosen as 2020 Tillman Scholars. In recognition of their service and leadership potential, the newly selected class will receive scholarship funding to pursue higher education and continue their service in the fields of healthcare, business, law, public service, STEM, education and the humanities. For the full list of 2020 Tillman Scholars, along with their service branches, institutions and fields of study, please visit ​http://scholars.ptf.org​.

END_OF_DOCUMENT_TOKEN_TO_BE_REPLACED

ROTC cadet Isabella Lee is a physics and neuroscience major who perseveres through difficult work and then enjoys sharing what she’s learned with other students. END_OF_DOCUMENT_TOKEN_TO_BE_REPLACED

END_OF_DOCUMENT_TOKEN_TO_BE_REPLACED

This semester, a total of 208 students with military ties representing all branches of the U.S. military earned their Syracuse University diplomas. The graduates include 99 veterans, 35 currently serving military members, and 59 family members and dependents. Forty-six students earned dual degrees.

END_OF_DOCUMENT_TOKEN_TO_BE_REPLACED

Anything But Beer, a craft brewery in downtown Syracuse, was incorporated in June 2017, one month after Logan Bonney completed his master’s degree in entrepreneurship. “We make grain-free, gluten-free, craft alcoholic beverages that are essentially beer alternatives,” says Bonney.

At first, the business operated with a wholesale model, manufacturing in Syracuse and distributing to other bars and breweries, which helped those retailers better serve niche consumer segments. “Then, after having people show up in our parking lot multiple times a week asking where they can try the beer, we realized that there was a demand for us to have a taproom,” Bonney says.

As a veteran, Bonney is also drawing on the resilience he learned in the New York Air National Guard. “It’s that classic military mindset,” he says. “You have to keep putting one foot in front of the other and try your hardest.”

For two years, 1st Lt. Savanna Clendining G’22 has risen early in the morning to attend her online classes for the Newhouse School of Public Communication’s master’s program while stationed in Vincenza, Italy, serving the 173rd Infantry Brigade Combat Team (Airborne). She has attended class on a mountainside in Slovenia and from a cliff in the Dolomite Mountains in northern Italy. Doing coursework by flashlight inside of a darkened tent hasn’t stopped Clendining from working toward her graduate degree, and neither has the coronavirus.

END_OF_DOCUMENT_TOKEN_TO_BE_REPLACED

Syracuse University’s Student Veterans Organization (SVO) and the Office of Veteran and Military Affairs (OVMA) are presenting five awards to student veterans in honor of their significant and notable achievements. The awards are normally announced at SVO’s Annual Ball and Awards Banquet, but the 2020 event was canceled due to the COVID-19 pandemic and the winners were instead announced in a Zoom “virtual lunch.”
END_OF_DOCUMENT_TOKEN_TO_BE_REPLACED