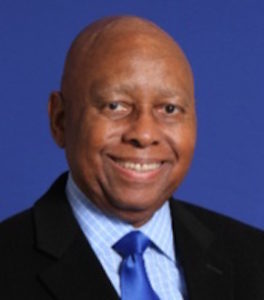 Bismarck Myrick is an alumnus of Syracuse and also a military veteran. You should know his story because it’s a Syracuse University Story – one that speaks to our past, our present, and our future.

Bismarck Myrick graduated from the University of Tampa in 1972 with a degree in History and subsequently earned an M.A. in History from Syracuse University in 1973.

As an enlisted army private, Bismarck served his country as a military police officer in Okinawa and Germany before later being assigned to South Korea as an infantry officer. After his service during the Vietnam War, Bismarck left the military as a decorated war veteran. He was awarded the Silver Star, the Purple Heart, and four Bronze Stars for his heroism in combat. In 1996, he was inducted into the Army’s Hall of Fame at Fort Benning, GA.

Bismarck entered the Foreign Service in 1980 and worked as Desk Officer for Somalia during its largest mass refugee crisis and war with Ethiopia. He then served as a Political Officer in Liberia. Later, he worked out of Washington, D.C. as the Action Officer in the Office of Strategic Nuclear Policy and eventually served on the U.S. Delegation to the Geneva Nuclear Testing Talks. During his tenure as a career member of the Senior Foreign Service, Bismarck served as the U.S. Ambassador to Lesotho from 1995-1998 and to the Republic of Liberia from 1999-2002. Notably, the Ambassador was fortunate enough to represent the United States at the swearing in of South Africa’s first democratically elected parliament under Nelson Mandela. His support for the evolving nation helped provide an American presence in the former apartheid state as it transitioned to an emerging democracy.

Today, Ambassador Myrick has returned to his home state, Virginia, and spends some of his time as a lecturer of political science and history at Old Dominion University in Norfolk. He enjoys travelling and completing study projects in southern and western Africa.

Bismarck Myrick is an alumnus of Syracuse University, and a veteran of the U.S. military. You should know his story.