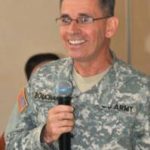 Brigadier General Ronald M. Bouchard, U.S. Army retired, is an alumnus of Syracuse University, and also a military veteran. You should know his story because it’s a Syracuse University story—one that speaks to our past, our present, and our future.

Bouchard grew up outside of Manchester, NH, working at a women’s shoe factory in Manchester throughout high school. He decided to stay in-state for his undergraduate education, attending the University of New Hampshire, where he was also an Army Reserve Officer Training Corps (ROTC) cadet in the Wildcat Battalion. Bouchard later attended Syracuse University’s School of Management, graduating in 1985 with a Master’s in Business Administration.

Bouchard has had a prolific career in the United States Army, including attaining the rank of Brigadier General and serving for 15 months as the Deputy Chief of Staff G-6 at the US Army Forces Command (FOSCOM), located at Fort McPherson, Georgia. His abilities to excel at that post, which included responsibilities for facilitating and reconstructing the conventional LandWarNet forces and providing command for combatant commanders in the Army, both at home and abroad, were cultivated and solidified through his 33-year service in the Army. Bouchard originally began his service as a Battalion Signal Officer in the 2nd Battalion of the 37th Armored Regiment in Friedberg, Germany. He continued to cultivate his experience as a Signal and Company Officer with posts at the 141st Signal Battalion in the Middle East, 2nd Battalion, 7th Infantry Division based in Washington, 127th Signal Brigade of the 7th Infantry Division, and as the Executive Officer of the 304th Signal Battalion, 1st Signal Brigade. This valuable experience within the Army’s communication sector led Bouchard to hold a number of senior positions within the Army’s communication field, such as the Chief of Staff of the United States Army Cadet Command, Executive Officer to the Commander of United States Forces Korea (UNC/CFC/UNFK), and the Deputy Commanding General of the United States Army Signal Center. At his retirement ceremony in 2010, Bouchard was lauded for his service in Korea as well as at FOSCOM in Georgia.

After leaving the Army in 2010, Bouchard joined NCI Information Systems, a leading IT provider and contractor for the US Government, the US Army, and civilian organizations, as their Senior Vice President and Deputy General Manager for the Army Programs Sector.

Bouchard’s legacy in the Army can be seen in his multiple military recognitions, primarily the Defense Superior Service Medal and the Legion of Merit.

Brigadier General Ronald M. Bouchard is an alumnus of Syracuse University, and a veteran of the U.S. military. You should know his story.