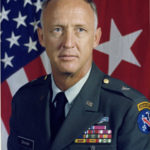 Brigadier General Todd P. Graham, U.S. Army retired, is an alumnus of Syracuse University, and also a military veteran. You should know his story because it’s a Syracuse University story—one that speaks to your past, our present, and our future.

From a young age, Graham knew he wanted to serve our country and join the military. Out of high school, Graham attended the United States Military Academy at West Point, where he flourished as a student and also as a cadet. Graham graduated from West Point in 1955. Ten years later, Graham attended Syracuse University’s Maxwell School, where received a Master’s of Arts in Geography. Graham’s time and experiences at West Point and SU prepared him for his service in the Army, including his tours in Vietnam. From 1968 thru 1969, Graham was the Commander of the 1st Air Cavalry Division’s 1st Battalion, 8thCavalry, the “Jumping Mustangs”. Throughout the 8th Cavalry’s time in Vietnam, they engaged in multiple campaigns in South Vietnam and Cambodia, and the 1st Battalion, which Graham commanded, received two Presidential Unit Citations and a Valorous Unit Citation for their excellent work during the Vietnam War.

After his time in Vietnam, Graham rose to prominence within the Army, becoming the Commander of the School Brigade for the US Army Infantry School at Fort Benning, Georgia. After his successful tenure at Fort Benning from 1977-1979, in addition to his performance as Chief of Staff for the XVIII Airborne Corps at Fort Bragg, North Carolina from 1980-1982, he earned the position of Deputy Commander for the US Army Western Command, stationed at Fort Shafter in Hawaii. Graham stayed in Hawaii for two years before returning to the continental United States, where he served as Assistant Division Commander for the 4thInfantry Division at Fort Carson, Colorado for a year and then as Deputy Commanding General for the Sixth US Army at the Presidio in San Francisco from 1988-1990.

Brigadier General Todd P. Graham is an alumnus of Syracuse University, and a veteran of the U.S. military. You should know his story.