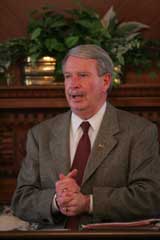 COL Smullen attended the University of Maine where he earned a B.A. in Business and Economics in 1962 and a commission as a U.S. Army infantry officer. Following two tours to Vietnam, he returned to school in 1974 to pursue a Master of Arts degree in Public Relations from Syracuse University’s Newhouse School of Public Communications.

In the course of his 30-year military career, COL Smullen held numerous command and staff positions as an infantryman and public affairs officer with additional overseas assignments to Korea and Panama. Notably, he served as the Special Assistant to the 11th and 12th Chairmen of the Joint Chiefs of Staff, Admiral William Crowe, Jr., and General Colin Powell.

Bill Smullen’s successful career continued in the public sector in which served as an executive assistant and, later, chief of staff to Secretary of State Colin Powell, where he monitored the formulation and implementation of State department policies and assisted with planning and development of U.S. foreign policy strategy.

Since 2003, Smullen has served as Director of the National Security Studies program and Senior Fellow in National Security Affairs at Syracuse University’s Maxwell School. He also teaches public relations at the Newhouse School of Public Communications. Drawing on his rich experience in the military and in public service, Smullen recently published the book Ways and Means for Managing Up: 50 Strategies for Helping You and Your Boss Succeed.

William Smullen is an alumnus of Syracuse University, and a veteran of the U.S. military. You should know his story.