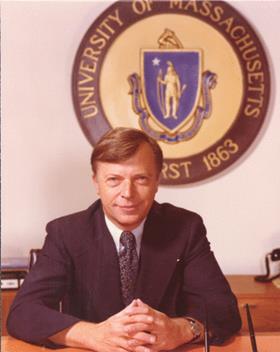 Born in 1927, David C. Knapp grew up in Syracuse, New York. With the Class of ’47, Knapp received a Bachelor’s of Art in political science from Syracuse University. A year later, he walked across the stage to receive his M.A. from the University of Chicago. He was then drafted into the U.S. Army’s 2nd Armored Division in Ft. Hood, Texas to eventually serve in Korea and West Germany from 1950 to 1952.

Knapp certainly enjoyed the college lifestyle as he immediately returned to Chicago to complete his Ph.D. in political science after his military service. Knapp graduated in 1953 and was immediately offered the faculty position of assistant professor of government at the University of New Hampshire (UNH). From 1955 to 1961, he served as assistant to the president and associate professor. His able skills as an administrator and leadership abilities developed in the Army quickly gained recognition, as he was promoted to Dean of the College of Liberal Arts at UNH. During his tenure, Knapp was granted two highly competitive, merit-based fellowship grants: one international educational exchange as a Fulbright Scholar in Finland and another as a Bullard Fellow in forest research at Harvard University.

In 1963, Knapp left UNH to become associate director of the Study of American Colleges of Agriculture, financed by the Carnegie Corporation and based at the University of Maryland, College Park. While working on this study, Knapp also became director of the Institute of College & University Administrators of the American Council of Education. Five years later, he accepted the inaugural position of Dean of the New York State College of Human Ecology, a statutory college within Cornell University. His success as Dean gained the attention of Cornell University administrators, who later appointed him Provost in 1974, responsible for organizing the merger of the Human Ecology College with the Graduate School of Nutrition.

After leaving Cornell, Knapp became president of the University of Massachusetts (UMass), a position he held from 1978 to 1990. His main mission was to renew the social purpose and reputation of the university. Under his brilliant 10-year leadership, UMass established the Polymer Science Research Center and Massachusetts Biotechnology Research Institute to support the growth of technology industries, created the Corporation for Educational Telecommunications to make the university a pioneer in distance learning, expanded the UMass system from three to five campuses, and enhanced its international profile.

For Knapp’s efforts in strengthening international relations with Japan and Germany and establishing new ones with China and Russia, he was awarded several honors. In 1990, the Emperor of Japan awarded him with the Order of the Rising Sun, the third highest order bestowed by the Japanese Government for his distinguished achievements in international relations. In 1992, Knapp was also recognized for his efforts in promoting development and trade between Massachusetts and Baden-Württemberg, Germany with the Staufer Medal. After retirement from presidency at UMass in 1990, Knapp was named President Emeritus and served as the Ralph Waldo Emerson Professor for three more years. Knapp continued to serve on governing boards of several organizations and has several scholarships in his name. Knapp passed away in April 2010.

David C. Knapp was an alumnus of Syracuse University and a veteran of the U.S. military. You should know his story.