Franklin Story Musgrave is an alumnus of Syracuse, and also a military veteran. You should know his story, because it’s a Syracuse University Story—one that speaks to our past, our present, and our future.

Born in Boston in 1935, Musgrave boasts an impressive record of scholastic achievement. His secondary education at Dexter School in Brookline, Massachusetts provided him a solid educational foundation. He later attended Syracuse University and earned a bachelor of science in math and statistics in 1958. Still, his insatiable thirst for knowledge led him to complete an impressive five additional degrees throughout his career including an M.B.A. from UCLA (1959), B.A. in chemistry from Marietta College (1960), M.D. from Columbia University (1964), M.S. in physiology and biophysics from the University of Kentucky (1966), and an M.A. in literature from the University of Houston-Clear Lake (1987).

Before entering college, however, Dr. Musgrave enlisted in the U.S. Marine Corps in 1953. During his enlistment, he served as an aviation electrician and instrument technician before receiving a promotion to aircraft crew chief. In this time, he traveled to Korea, Japan, and Hawaii, and he explored East Asia aboard the USS Wasp. In addition to his travels, Musgrave was an accomplished pilot who flew more than 17,700 hours in 160 different aircrafts and participated in more than 800 free-falls as a daring parachutist. 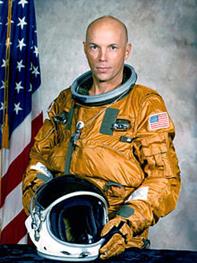 Among his numerous accomplishments and achievements, Musgrave was selected to work for NASA as a scientist-astronaut in 1967. He was instrumental in designing and developing the Skylab Program and all of the Space Shuttle extravehicular activity equipment. In his roles as a spacecraft communicator, mission specialist, and payload commander, he spent 53 days, 9 hours, and 55 minutes in space during his time with NASA. He became the second astronaut to take six spaceflights after his completion of the STS-80 mission in 1996, and the only astronaut to fly missions on all five of the Space Shuttles before retiring in 1997.

As he clearly demonstrated throughout his remarkable career, Dr. Musgrave firmly believes that the key to exploration is “getting out of the comfortable path.” Today, Dr. Musgrave enjoys his well-earned retirement by consulting with Disney’s Imagineering and Applied Minds in California. Musgrave is also a 1995 inductee of the International Space Hall of Fame and a 1997 recipient of Syracuse University’s highest alumni honor, the George Arents Award.

Dr. Franklin Story Musgrave is an alumnus of Syracuse University and a veteran of the U.S. military. You should know his story.