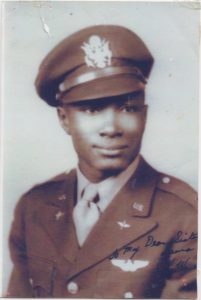 Hillard Pouncy was born on February 8, 1922 in Prichard, Alabama. He grew up in Eufaula, Alabama, on the Chattahoochee River, and had never traveled more than 30 miles from home before he went off to college at the Tuskegee Institute.

It was at Tuskegee where Pouncy says he “saw the Airmen” – he saw their uniforms, how they carried themselves, and he wanted in! A short time later, Hillard went on to become a member of the legendary “Tuskegee Airmen,” a group of nearly 1,000 African American pilots and bombardiers trained at Moton Field in Tuskegee, Alabama from 1941 to 1946. Reflecting on his wartime experience as a member of the 477th Bombardment Group, Pouncy says he’s often asked:

“Wasn’t that a stupid thing to do? Flying when the country didn’t care about us?”

In response, Hillard says that “a lot of people tell us that our air corps, the Tuskegee Airmen, helped lead the Civil Rights Movement. So maybe it was worthwhile.”

Worthwhile indeed: the Tuskegee Airmen overcame segregation and prejudice to become one of the most highly respected fighter groups of World War II. They proved conclusively that African Americans could fly and maintain sophisticated combat aircraft. The Tuskegee Airmen’s achievements, together with the men and women who supported them, paved the way for full integration of the U.S. military. In fact, many historians credit the success of the Tuskegee Airmen as the motivation for President Harry Truman to sign Executive Order 9981 in July, 1948, which ended segregation in the U.S. military, and arguably paved the way for the U.S. Supreme Court’s 1954 Brown v. Board of Education decision that integrated public schools.

After the service, Hillard Pouncy went on to earn a doctorate in organic chemistry from Syracuse University.  His degree from SU paved the way to a 30 year as a chemist for Union Carbide – including six years living and working in the Kingdom of Saudi Arabia as a technical advisor to Saudi Arabian Petrochemical Company.  However, even in the face of his successful professional career with Union Carbide, Hillard remained connected to the military.  Major Hillard Pouncy served for more than 17 years with the New York Air National Guard, ultimately retiring from the U.S. Air Force Reserve.

In 2008, Hillard received the Congressional Gold Medal in recognition of service with the Tuskegee Airmen during World War II, and is one of less than 200 World War II airmen still alive today.

Hillard Pouncy is an alumnus of Syracuse University, and a veteran of the U.S. military. You should know his story.